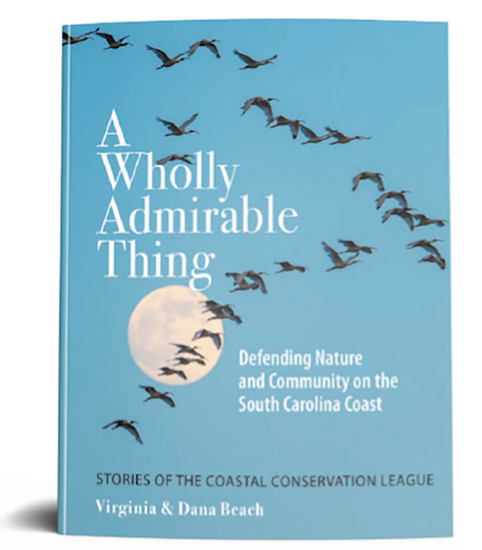 In a new book, Virginia and Dana Beach chronicle 10 stories that showcase the rise of the Coastal Conservation League to one of the country’s most tenacious and innovative conservation groups.

The book highlights transformational initiatives undertaken by the Conservation League over three decades in partnership with community activists up and down the South Carolina coast.

A Wholly Admirable Thing is tale of formidable alliances of courageous citizens, standing up for wild species and human communities so that all can thrive and endure.

One hundred percent of the proceeds from purchases of A Wholly Admirable Thing will support the Conservation League and our mission. Click the button below to purchase the book or visit Evening Post Books online shop here.

Just announced! You can also purchase the e-book version of A Wholly Admirable Thing at Amazon’s Kindle Store. Check it out here.

More about A Wholly Admirable Thing

A few weeks before Hurricane Hugo made landfall in September of 1989, the South Carolina Coastal Conservation League opened shop in a one-room office in downtown Charleston. Armed with founder Dana Beach’s personal desktop computer and the local phone book, the three-person staff sent out its first membership mailing, rushing to the post office each day to check for responses. The organization grew from a hundred members that first fall to a thousand the following year and several thousand by the end of the first decade.

Prior to Hurricane Hugo, the 1960s, 70s and 80s had seen a surge of resort and residential growth in the South Carolina Lowcountry, displacing whole communities of people and wildlife along the coast, overtaking what had traditionally been a resourced-based economy. The storm triggered a pause, a reset, which the Conservation League seized upon. Lawsuits, back-room deals and corruption in high places conspired against the public trust at every turn. Nevertheless, a deep-rooted love of the Lowcountry, combined with practical opportunism and longstanding friendships cultivated across the generations, unified and empowered conservationists to prevail.

The stories in A Wholly Admirable Thing chronicle these transformational successes over three decades of community activism, led by one of the country’s most innovative and persistent conservation groups.  The book highlights the Conservation League’s founding principles and culture, institutional evolution, dogged work ethic, fearless advocacy, pragmatic politicking, and mastery of communication and community organizing. It also features the voices of countless citizens and activists on the front lines—through a mix of narrative, personal interview and first-person memoir and reflection.

Finally, the book reveals the critical importance of place—the biological, historical, political and social backdrop of an ancient and troubled region—in shaping a conservation ethic and agenda for the present day. The history of the Conservation League and its diverse collaborators spotlights a region in the throes of wrenching change: staggering out of the hazy mist of an insular, pre-modern world of planters, yeomen farmers and Gullah slave descendants, into an era dominated by global economic forces and instantaneous communication. The struggle continues today. It is a never-ending tale of a formidable alliance of courageous citizens, standing up for wild species and human communities so that all can thrive and endure.

“The Coastal Conservation League is an enduring miracle. The rest of the country doesn’t think of South Carolina as an environmental stronghold; but the Conservation League, as this volume attests, has proved that people everywhere will love and protect their place. This fight will only get more difficult in the future as sea levels rise and storms build — that’s why it is so important to appreciate the history, and remember the epic battles already won. When I visit that remarkable coast and see the proof of the Coastal Conservation League’s success, it helps me believe that we can do this work around the world.”–Bill McKibben, environmentalist and founder of 350.org

“One of the greatest joys of my 22-year tenure at the Penn Center was my working relationship with my friend Dana Beach and the Coastal Conservation League. We realized that environmental and Gullah cultural heritage are inextricably linked. In this book, one will see how the preservation of both can be promoted equitably. Virginia and Dana Beach have woven an important history that includes the proud story of how engagement of a diverse group of people and organizations propelled relationships toward achieving a viable community. I believe the groundbreaking stories in this book will bring global benefits in preserving environmental and cultural heritage.”–Emory Campbell, former director of Penn Center and Gullah heritage consultant

“A Wholly Admirable Thing is an inspiring tale of grassroots activism that has actually worked to preserve and improve quality of life for the greater good of nearly all South Carolinians. A history of one institution — the Coastal Conservation League — it is a must-read for anyone who’s ever wondered if you can really take on the big guys and stop them in their tracks. You may not know what the Conservation League is, or does, but every corrupt politician, thoughtless developer, and megalomaniacal overlord with dreams of running roughshod over nature and people’s lives knows them and fears them. The rest of us should give thanks to the League and those who built it with values, focus, and perseverance against tremendous odds.”–John Huey, former editor-in-chief at Time Inc. and member of the advisory board to the USC Annenberg Center on Communication, Leadership and Policy

Virginia Beach writes for numerous local and regional publications on the subjects of conservation and natural history and has served on the staffs of The Nature Conservancy, the Lowcountry Open Land Trust and the South Carolina Sea Grant Consortium, as well as on the national editorial board of Saving Land.  A native of Richmond, she earned a B.A. in English from the University of Virginia and served for two years as a Peace Corps volunteer in East Africa.

Virginia’s first book, Medway, a history of a Lowcountry rice plantation, was published by Wyrick & Company with photographs by Tom Blagden.  Her most recent book, Rice & Ducks: The Surprising Convergence that Saved the Carolina Lowcountry, published jointly by Ducks Unlimited and Evening Post Books, is a history of the land conservation movement in Lowcountry South Carolina and won the 2015 Independent Publisher’s gold medal for best southeastern nonfiction.

Dana is the recipient of the S.C. Order of the Palmetto, the James L. Dockery Southern Environmental Leadership Award, the EPA and Environmental Law Institute National Wetlands Award, and the S.C. Legislature’s Environmental Awareness Award. He is also the author of Coastal Sprawl, a Pew Oceans Commission report on the effects of urban design on aquatic ecosystems.

In 2014 Dana wrote Deveaux, a book featuring his photographs of the Deveaux Bank seabird sanctuary, published jointly by the University of South Carolina Press and the Coastal Conservation League. A year later he received the Peter Benchley Hero of the Seas Award.

Virginia and Dana are avid birders and nature enthusiasts, having lived in Charleston, South Carolina for 35 years and raised their two children there. While they have served as each other’s editors for many years, A Wholly Admirable Thing is the couple’s first joint book.