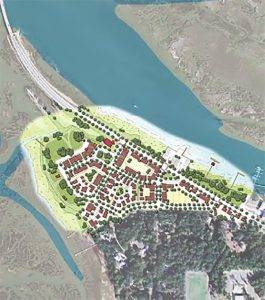 Whitehall, undeveloped now, is a logical growth area for the City.  Whitehall’s location, along the water and close to downtown, is well suited for growth, but past development proposals for this property have been hotly contested.

Today, we are in a much better position to get this development right because we have three new important tools: Beaufort’s Civic Master Plan, adopted in 2014, this summer after 80 public meetings; Lady’s Island Growth Principles; and the Beaufort Code, a zoning code adopted this summer after 80 public meetings.these guiding documents help describe a vision for Whitehall as “a fully integrated, mixed-use, pedestrian friendly neighborhood” that can “be a logical extension of downtown [Beaufort] that complements, but does not compete with, the historic core.”

As recently as November, the Metropolitan Planning Commission denied a plan that did not meet the vision of the City Civic Master Plan. The developer has revised and resubmitted a new plan.

The new proposed plan is available here with full packet download here.  This new plan has been given conceptual approval by the Metropolitan Planning Commission.

What is similar to Whitehall? Click here to see similar developments that have components of traditional neighborhoods.

Throughout the fall, we have asked planning commission members to ensure the proposed development plan for Whitehall adheres to the goals of the Beaufort Civic Master Plan and Beaufort Code. We will continue to ask that developers:

Why does all of this matter?

The Civic Master Plan represents the guiding vision for growth in the City.  It gives residents and other jurisdictions a road map about how the City intends to grow which influences what roads and infrastructure is needed, what services may cost to provide and what complementary land uses exist.   This represents the first conceptual plan to come before the planning commission since adoption of the Beaufort Code and therefore carries an even higher burden to meet the standards set.