Update: In April 2019, as a result of large-scale community opposition to the proposed development, the Town of Moncks Corner Planning Commission voted 4 to 2 to recommend denial to annex Gippy Plantation into the town and rezone the property to PUD. The developers subsequently decided to pull their annexation and zoning request instead of moving forward to Town Council. This is a great step in the right direction, but the property is still not permanently protected. The Coastal Conservation League and our partners are now exploring opportunities to try and permanently protect as much of the 800-acre tract of land as possible.

Gippy Plantation is an 800-acre property on the northwestern bank of the Cooper River located in between Fort Fairlawn and Lewisfield Plantation with approximately 330 acres of historic rice fields and freshwater wetlands protected by a conservation easement.

On November 6th, 2018, a public meeting was held by DR Horton to present conceptual plans to develop the 470 acres not under easement and have petitioned the Town of Moncks Corner to be annexed in order to gain access to public sewer and water to increase the density of the development.

The current county zoning for this site is Flex1, which allows subdivision of no denser than lots of .69 and acre, or about 681 units. If it is annexed into the Town of Moncks Corner, the developers intend to pursue a Planned Unit Development (PUD) to build upwards of 1,200 units. 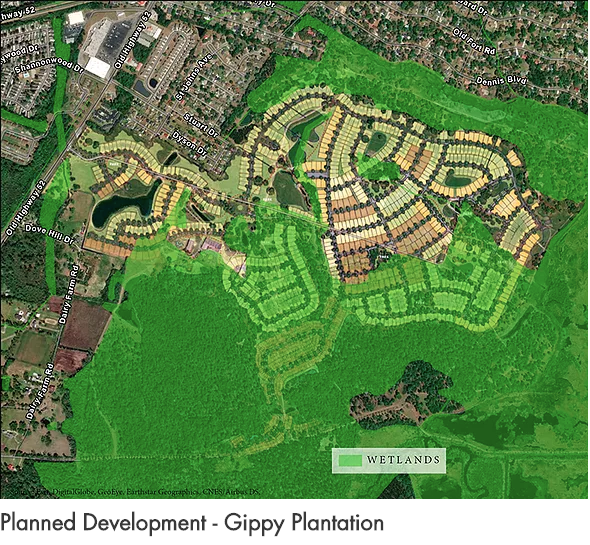 Even with the amount of land that is protected in Berkeley County either within the Francis Marion National Forest or the Cooper River Historic District, sprawl along the western bank of the west branch of the Cooper River is threatening to isolate the historic district and degrade the natural landscape of the watershed.

Berkeley County experienced a 13.9% increase in population between 2010 and 2015 and continues to be one of the fastest growing counties in the state. Much of the growth can be attributed to the County’s targeted efforts to lure major industries like Volvo to the region over the past 15 years. In anticipation of the expected jobs coming to Berkeley, rapid speculative real estate development occurred, particularly around the US176 and US17A corridor between Summerville and Moncks Corner. As of 2016, Berkeley County had an estimated 77,000 housing units permitted.

With the amount of growth already planned for Berkeley County around 176/17A and US52, Berkeley County and its municipalities should be focusing on guiding its growth inward where infrastructure already exists to support development and protecting the rural areas along the Cooper River to the east and the headwaters to the Ashley River on the western side of the county.

Every new development in a greenfield area requires public services like: new roads, gas, water, sewer, emergency services, schools and busing services, etc. If development in Berkeley County continues to sprawl outwards, not only will its precious natural and cultural resources be threatened, but the residents will be burdened by the increased traffic and drainage issues as well as the increased taxes needed to pay for new infrastructure to support the growth.

Berkeley County just elected new leadership and this provides an opportunity to explore new options for preserving the resources that residents of the county hold so dear. The Francis Marion National Forest is a great asset to the region and the state, but county and municipal leaders must also be considering the value of natural resources closer to the developed communities.

The Cooper River watershed provides drinking water to scores of residents in the metropolitan region. Just as importantly, conserving the open space along on the Cooper River corridor ensures that the natural drainage features that currently help minimize flooding in the urban areas down river continues. Using Old Highway 52 as the edge of an urban growth boundary will help protect the Cooper River watershed for the entire tri county region. Berkeley County should consider the same efforts to establish an urban growth boundary that protects the Great Cypress Swamp on the western side of the county using Black Tom Road and Jedburg Road as the boundary to protect the headwaters of the Ashley River.

While down zoning outside an urban growth boundary is a great tool to protect rural land uses, zoning can be changed. For this reason, establishing tools to permanently conserve open space to protect natural resources is important. Counties like Charleston and Beaufort have established programs funded through local sales tax referendums that help fund land protection. In 2016, Charleston County passed its second half-cent sales tax referendum that pays for new roads, mass transit, and a greenbelt program. Of the $2.1 billion that the sales tax will generate over the next 20 years, $210 million will go towards greenbelt projects in both the urban and rural areas of the county. In 2018, Beaufort County passed a bond referendum attached to property tax millage that will raise $25 million to fund its Rural and Critical Lands program.

As Berkeley County faces the steep costs of providing services to suburban development in greenfield areas, investing in programs like Charleston’s Greenbelt or Beaufort’s Rural and Critical Lands programs ultimately save local governments money that benefit the overall quality of life for residents by preserving areas for hunting, fishing, and other outdoor recreational activities.

Connecting Gippy and Cainhoy to the Bigger Picture

Gippy and Cainhoy serve as bookends of threats to the Cooper River corridor. Gippy could have over a thousand new residential units that will put immense strain on local scenic roads and risk exacerbating drainage issues on surrounding neighborhoods at the northern end of the Cooper River corridor. Cainhoy is expected to have at least 9,000 new residential units on either side of Clements Ferry Road on the southern end of the Cooper River Corridor. This will cripple the already overly congested Clements Ferry Road, 526, and Highway 41 and threatens to destroy the ecological resources adjacent the Francis Marion National Forest.

These two developments are both on historic properties that serve as buffers to other significant natural and cultural resources within the Cooper River basin.

A conservation program in Berkeley County that is similar to Charleston’s Greenbelt or Beaufort’s Rural and Critical Lands programs could help provide a financial solution to protect these properties and preserve the high quality of life for residents in Berkeley County and the larger tricounty region.

Berkeley leaders must look at these two threats as an incentive to establish their own county-wide land protection program that works in concert with creating an urban growth boundary that has rural, low-density zoning outside the boundary.  A permanent land protection tool like a Greenbelt or Rural and Critical Lands program for Berkeley County would help ensure Berkeley County maintains a thriving agrarian, outdoor recreational, and sylvicultural economy.