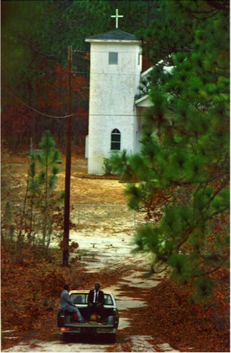 In 1996, the Conservation League consummated a multi-year effort to save Sandy Island. The 12,000-acre island separating the Waccamaw and the Pee Dee rivers, between Georgetown and Myrtle Beach, boasts cypress swamps, long leaf pine forests, and endangered flora and fauna, and, on the southern end, a historic Gullah community. In 1993, it looked like Sandy Island’s fate was sealed with a proposal for a bridge to the mainland, a highway in the center, and plans for an upscale equestrian resort with 9,500 houses and at least two golf courses.

When the bridge permit was placed on public notice, the Conservation League teamed up with the Southern Environmental Law Center (SELC) to challenge the project. We simultaneously worked with the Penn Center to engage Sandy Island residents in a discussion about the implications of a bridge for the future of their community.

Over the next three years,the Conservation League, SELC and community representatives participated in dozens of meetings with state and federal agencies and provided volumes of information and analysis on the regulatory proceedings. The “battle for Sandy Island” captured the attention of the media and was covered extensively in every paper in South Carolina, as well as the New York Times, the Los Angeles Times, and the Washington Post. (It is now the subject of an hour-long documentary produced by South Carolina Educational Television.)

Simultaneously, we quietly worked with The Nature Conservancy to negotiate the sale of the island, which was ultimate purchased through an innovative use of the South Carolina Department of Transportation’s wetlands mitigation funds. In addition to securing 9,000 acres on Sandy Island, the transaction also protected 7,000 acres of mature cypress/tupelo forest along the Waccamaw River.