In response to the proposals presented by the County in 2020, a group of Johns Island residents formed a grassroots coalition of community members committed to improving roads around the Main Road Corridor while also protecting the very features that make Johns Island unique. This group calls them selves Rational Roads for Johns Island and throughout 2021 the Conservation League has supported Rational Roads’ efforts to host public engagement events throughout Johns Island and bring two nationally renown transportation engineers to Johns Island to develop a new, sixth alternative to present to Charleston County.

You can learn more about the Rational Roads effort and their Alternative 6 recommendations by visiting their website here.

Simply widening roads does not provide a viable long-term solution to the traffic problem, nor do wider roads make it safer for people to move around the region. Wider roads lead to faster cars, which increases the risk for more fatalities, and without dedicated bicycle and pedestrian infrastructure included with road design, the opportunities for conflicts between automobiles and people on foot or bike rises exponentially.

We must think outside of the box to identify solutions that get cars off the road by providing access to multiple modes of travel and not just single-occupancy vehicles. Currently, the sea islands of Johns, Kiawah, Seabrook, and Wadmalaw islands lack access to public transportation or safe and connected bicycle and pedestrian infrastructure- which is a big part of the congestion and safe mobility problem Charleston County needs to address as part of their efforts to improve safety and flow of the Main Road Corridor on Johns Island.

Anyone who has driven along the intersection of US 17 and Main Road in West Ashley knows its plagued by traffic problems. At rush hour the intersection gets backed up by drivers turning left onto Johns Island. It is also one of the most dangerous intersections in Charleston County- with consistently high numbers of crashes and fatalities tracked by the South Carolina Department of Public Safety. This low-lying intersection is also prone to flooding from king tides, rain bombs and hurricanes. Resilient safety and congestion solutions are needed along the Main Road Corridor, especially considering it is the hurricane evacuation route for the sea islands.

To address the mounting concerns around safety and congestion along the corridor, Charleston County Council approved a phased, three-segment approach for the Main Road Corridor Project in 2018. Improving the intersection at US 17 and Main Road is planned to create a more efficient access point on and off Johns Island. And upgrades to drainage infrastructure and bicycle and pedestrian facilities along the corridor are planned to increase safety and mobility for all road users. 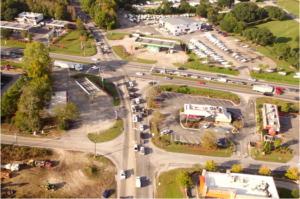 Aerial photo of Segment A – Intersection of Main Road and U.S. 17

The budget for the three phased project is $195,000,000 and the source is the 2016 Charleston County Half-Cent Sales Tax which was approved by voters in November 2016.  The Main Road Corridor project was on the list for the referendum as a project of regional significance. County Council voted to complete the project in the three phases for faster overall relief: 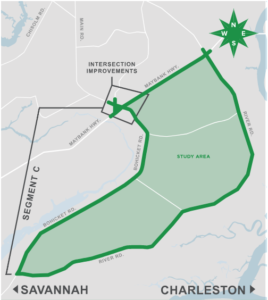 As Charleston County moves forward through the engineering design phase for Segment A of the project, it has decided to hop over Segment B (Main Road between River and Maybank) to begin analyzing different alternatives for Segment C. Five alternatives were presented to the public in the fall of 2020 to achieve the stated project goals of reducing traffic congestion and increasing capacity on Main Road/Bohicket Road from Maybank Highway to Betsy Kerrison Parkway and providing opportunities for bicyclists and pedestrians to safely travel throughout the project area.

The five alternatives presented include options to widen River Road, widen Bohicket Road, and construct an entirely new road across Johns Island. Unfortunately, all five designs for the project create destructive four-and five-lane highways through the rural southern portion of the island which would drastically alter its character without providing meaningful long term relief to the safety and congestion issues at hand. The current proposals would impact dozens of businesses and homes, many of which are African American heirs’ properties. And building the new roads would require paving over active productive farmland, fill wetlands that help protect against flooding, and impact many of the grand trees that make up the iconic tree canopy for which Johns Island is celebrated. 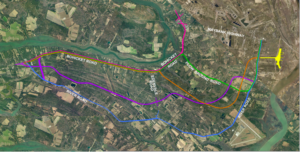 Widening Bohicket Road to four lanes will not solve the traffic and safety issues along the corridor and will likely make those matters worse in the future. Improvements should be made based upon traffic and safety congestion and impact data, not arbitrary segmentation of roads. Current data highlights where the most pressing needs are. Identifying where the pressure points and problem areas are located along the corridor allows us to understand where attention and improvements need to be focused.

The following heatmap comes from accident data for the period 1/1/2010 to 10/30/2020 from the Office of Highway Safety and Justice Programs in the South Carolina Department of Public Safety. The larger/darker red dots show where the highest amount of collisions with injuries happen on Johns Island: 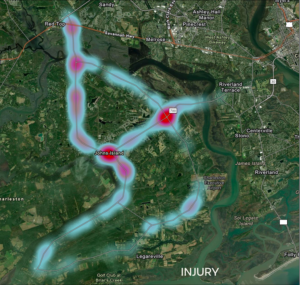 The next image, derived from the same data set shows where the highest number of traffic fatalities are located on Johns Island: 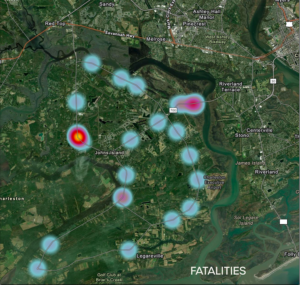 The final image, also derived from the same data set shows where the highest number of traffic collisions occur on Johns Island: 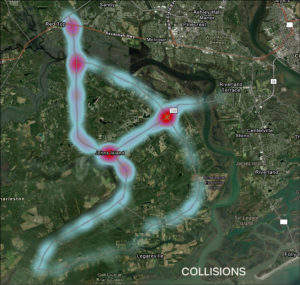 The data is clear and speaks for itself: the most pressing road issues on Johns Island are north of Edenvale Road, specifically on Main/Bohicket between Mary Ann Point and Edenvale. Incremental improvements to these roads including focusing on problem intersections and constructing bicycle and pedestrian infrastructure throughout the entire island rather than widening the entirety of the corridor to four and five lanes would:

This type of holistic, scaled approach does not eliminate implementing impactful and cost effective solutions on Bohicket and River such as adding passing lanes where needed to improve flow and safety. It also accomplishes the project goals using significantly less time and money and significantly less impacts to the cultural and natural resources that are the irreplaceable and defining features of Johns Island.