SCDOT released a Supplemental Environmental Impact Statement (SEIS) for the Mark Clark Extension (I-526) in August 2021. Public comments will be accepted until October 15, 2021 and an in-person public hearing will be held on September 14, 2021 from 6pm – 7pm at the Essex Village Church, 736 Savage Road, Charleston, SC. Click here to view the public hearing materials, submit comments and sign up to speak at the upcoming meeting.

SCDOT was required to conduct an SEIS because their Draft Environmental Impact Statement (DEIS) was released in 2010 and the data collected for that study was out-of-date. The new SEIS still only considered the same original alternatives from the 2010 DEIS and failed to consider new, more equitable and effective ways to move people around the region — such as Bus Rapid Transit lines in West Ashley between Bees Ferry Road and Downtown Charleston, on James Island along Folly Road, and an express bus line from Johns Island to Downtown Charleston.

The SEIS reaffirms that the least impactful (but still highly destructive and ineffective) alternative is Alternative G: a nearly 8-mile long, low-speed parkway-style road that cuts through neighborhoods in West Ashley, Johns Island, and James Island displacing 13 homes and seven commercial buildings. This alternative would also cut through James Island County Park, taking more than 32 acres of the northern portion of the park, destroy more than 31 acres of fresh and saltwater wetlands, and open up Johns Island to even more sprawling development than what has already occurred over the past decade since the DEIS was published.

The SEIS also reaffirms that all of the negative environmental and community impacts that would occur as a result of this out-dated low-speed roadway would have minimal benefit to regional mobility, yet the cost continues to climb! The latest cost estimate included in the SEIS is $772 million using 2019 dollars, which is more than $50 million higher than the last cost estimate completed four years earlier in 2015. As the data in the report shows, and is depicted below, Alternative G has provides hardly any improvement to traffic congestion on Savannah Highway, Sam Rittenberg Boulevard, or Ashley River Road in West Ashley, little benefit to Folly Road on James Island, and no benefit to Maybank Highway on Johns Island, but it does make traffic worse on River Road. 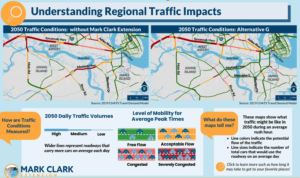 The Mark Clark Extension was, has been, and still is a destructive, fiscally irresponsible, last-century political idea that has no benefit to our region. Cities around the country are tearing down highways like this and our politicians here in Charleston are using public tax dollars without our consent that were intended to fund other critical, logical infrastructure projects in order to try and keep this zombie project relevant.

Citizen’s voices are needed now more than ever to tell SCDOT and Charleston County that this project is bad for the environment, bad for the community, and bad for our region. We have more important issues that we should be investing in and there are cheaper solutions to improve our mobility than the Mark Clark Extension. Weigh in now!

I-526 or the “Mark Clark Expressway” is an interstate in Charleston County that currently terminates at Savannah Highway in West Ashley and in Mount Pleasant. In June 2007, the State Infrastructure Bank (SIB) voted to fund the I-526 extension from the Savannah Highway terminus to the James Island Connector (SC-30).

This interstate road project to a rural sea island is a huge problem.

It doesn’t solve traffic congestion. The 8-mile extension was originally estimated to cost $420 million, yet save drivers only 36 seconds in travel time from West Ashley to James Island. Further, it takes drivers from one flooded area to another, ending in the busy and flood-prone Hospital District on Calhoun Street.

It pulls money from other statewide priorities. $420 million dollars for I-526 is coming from the State Transportation Infrastructure Bank, the funding entity for all projects of statewide significance and economic development. Given their limited resources, by choosing to obligate funds to I-526, the state bank is deciding against funding improvements to the I-26 and I-85 corridors, freight rail, and new economic development like Boeing in North Charleston. The I-526 extension project is not ranked on the state priority list.

The proposed expansion of I-526 places pressure on rural areas and natural resources and is an inefficient use of valuable coastal land and habitat. Specifically, the proposed alignment (Alternative G) cuts through neighborhoods in West Ashley and the James Island County Park and impacts 17.4 acres of wetlands. Read the 2010 Draft Environmental Impact Statement here.

It promotes automobile-dependent transportation across Charleston County and increases sprawl outside the urban growth boundary rather than repairing intersections and roads near the problem’s source. This new contract calls for using half-cent sales tax funding, which was proposed to raise money to fix problem areas like Main and 17, Savannah Highway, Glenn McConnell Parkway. A large portion of the sales tax is supposed to fund the region’s first Bus Rapid Transit system to help commuters get out of traffic – and their cars.

Why do some people still think we need the I-526 extension?

Proponents claim that I-526 would improve hurricane evacuation for residents of Johns Island, James Island, and Wadmalaw Island – a flawed assertion on three counts. First, the official evacuation route from Johns Island and Wadmalaw Island is US 17 south to Walterboro, not via I-526. Further, spending this large sum of money on I-526 may come at the expense of projects that would actually improve evacuation off Johns Island, like improvements to Main/Bohicket Roads. Second, building new roads into suburban areas encourages sprawl. If we extend I-526 onto Johns Island, we can expect subdivisions to take the place of farms and wetlands, exacerbating flooding. Encouraging development on a vulnerable sea island is not a good way to improve our preparedness for a hurricane. Third, funneling more traffic onto I-526 from new development on Johns and James Island would worsen traffic at the intersection of I-526 and I-26, delaying evacuation from the coast.

In the comments on the Draft Environmental Impact Statement (EIS), the National Oceanic and Atmospheric Administration (NOAA), the U.S. Environmental Protection Agency (EPA) and others noted that the U.S. Corps of Engineers should not consider extending 526 to improve hurricane evacuation. The Corps agreed, responding: “Hurricane evacuation was not considered a need for this project.”

Under the current three-party contract, the S.C. Department of Transportation would build the road; the S.C. Transportation Infrastructure Bank would cover no more than $420 million of the project cost; and Charleston County has agreed to cover the balance of at least $305 million.

In the newest Intergovernmental Agreement, Charleston County committed funds from the half-cent sales tax. After being approved at the Bank Board meeting, the contract moved to the state’s Joint Bond Review Committee, who then appointed a special subcommittee to determine the validity Charleston County’s commitment to use their sales tax funds. The subcommittee met on March 27, 2019 hearing presentations from the S.C. Transportation Infrastructure Bank chair, John B. White, Jr. and the S.C. Department of Transportation secretary, Christy Hall. During their testimonies both agencies stated that they believe that the new contract is better for South Carolina because it puts all financial risk on Charleston County to come up with the more than $300 million shortfall beyond the Infrastructure Bank’s $420 million commitment. Charleston County presented to the subcommittee on April 3, 2019, arguing the sales tax could be used on “anything that is defined as a road” and that the county was replete with cash.

But the new contract isn’t better for Charleston County. In fact, it is a lot worse. In the newest agreement, Charleston County is agreeing to pay at least $305 million, before paying for any unanticipated overruns. And Charleston County still cannot explain how they could fund the projects promised to the voters and I-526 with the sales tax revenue. Projects like the Main/Bohicket Road improvements, Bus Rapid Transit along the I-26 corridor, Savannah Highway Capacity Improvements, and redesigning Folly Road are all on the chopping block.

Voters who narrowly approved the 2016 sales tax believed at the time that they were taxing themselves to pay for badly needed projects that did not include I-526. At the time, Council members publicly decried the suggestion that the sales tax would be used for I-526 and approved a list of half-cent sales tax projects that deliberately did not include the I-526 extension. In fact, on July 19 and 27, they specifically debated adding I-526 to the sales tax list and the vote failed. Charleston County published assurances that they would stick to the list. “As I have said many times, each needs to be considered separately. The half-penny sales tax program Charleston County Council passed this summer, which is on the November ballot, was the result of careful study of our road and transit needs and did not include funding for the Mark Clark… Worries that council will not complete these projects as proposed are unfounded.” – Op-Ed by Council member Sass, Oct. 29, 2016.

Local elected officials even held a press conference in support of the half-cent sales tax program. Standing behind a poster with a list of projects to be funded, these leaders assured Charleston County voters that our hard-earned tax dollars would be spent only on those listed county priorities.

Less than two months after voters agreed to the tax, Charleston County Council passed an ordinance committing $150 million for the I-526 extension without explaining where that money would be taken from.

On June 3, 2019, the Coastal Conservation League and three Charleston County residents filed a lawsuit in South Carolina state court challenging the county’s use of funds from the 2016 half-cent sales tax for the Interstate 526 extension project. Andy Gowder of Charleston firm Austen Gowder is representing the environmental nonprofit and citizen plaintiffs.

The request for a declaratory judgement contends Charleston County is breaking its “contract with voters” by obligating half-cent sales tax money to the I-526 extension. In 2016, I-526 was not listed in the ordinance Charleston County Council approved to put the sales tax referendum on the ballot.

The voters were duped.

Plaintiffs are asking a judge to determine the validity of the Intergovernmental Agreement for I-526. Under that three-party contract, the S.C. Department of Transportation would build the road; the S.C. Transportation Infrastructure Bank would cover $420 million of the project cost; and Charleston County would cover the balance of at least $305 million. To cover its portion of the project contract, Charleston County has committed funds from the half-cent sales tax.

Our legal challenge is continuing to work its way through the court system.

The Coastal Conservation League continues advocate against the I-526 extension project and will periodically update this page as new information is provided.

Excerpt: Charleston County officials have recently argued that 526 should qualify for half-cent sales tax funds because the referendum question voters approved in 2016 didn’t specifically list projects. But the ordinance did, and 526 was very conspicuously not among those listed. In fact, County Council voted in July 2016 to remove it from the ordinance.

Contract review continues on I-526

Charleston County reveals plan for I-526

In Columbia this morning, Charleston County’s financial advisor, attorney and Chairman Elliott Summey presented the county’s plans to fund its portion of the extension…