What is now Gadsden Creek is a highly polluted, tidally influenced drainage ditch that sits on top of an unlined landfill. The city of Charleston chose in the mid-20th century to place that landfill in a predominantly Black neighborhood, a decision that has been endangering the health and safety of area residents for decades. There is no debate that this is a question of environmental racism that degrades the physical environment of Black and Brown communities, which are far more likely to be made sick by contaminated soil, polluted air, and poisoned water.

The creek is in the news again, and the city is deciding on its next steps. We want to elaborate on what we have said previously. 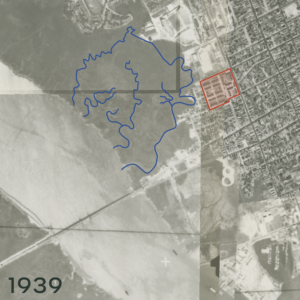 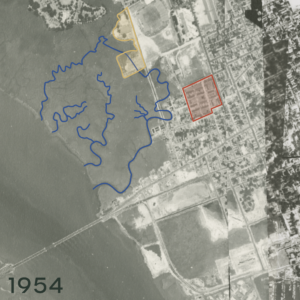 The yellow highlighted area shows the extent of the city’s landfill. 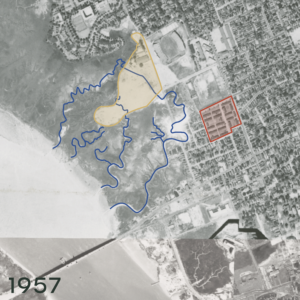 The landfill expansion continues west towards the Ashley River. 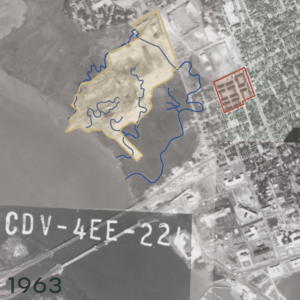 The landfill expansion has reached the Ashley River, and is moving south. 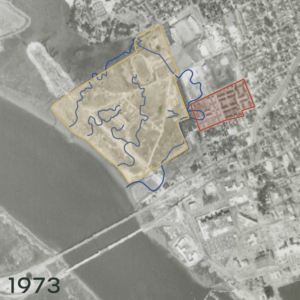 The landfill expansion is complete, and the city is laying out roads like Lockwood and Fishburne. 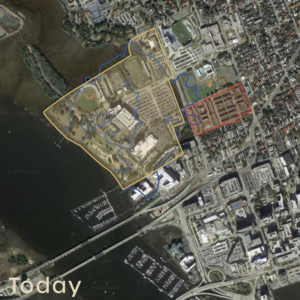 1) Consider the impacts to nearby communities when siting landfills. Fundamentally, landfill-siting decisions shouldn’t disproportionately affect Black communities.  Gadsden Green and the Westside Neighborhood bear the evidence of decades of neglect and intentional damage, from dumping trash in the Ashley River to routing the Crosstown through Black neighborhoods. Solutions should not set the stage for displacement and gentrification.

2) Clean up the mess. We love creeks as much as anyone, but in the case of a drainage ditch over a leaking, unlined landfill, we’re concerned about public health risks, and we have seen no data that supports the status quo. Black communities have borne the worst effects of landfills, and in other cases, like Pinewood in Sumter County, officials have taken action to contain the mess. Gadsden Green deserves the same attention

3) Fix the flooding. Our vision is a healthy, resilient, and inclusive Charleston. Communities that flood regularly, particularly because of the city’s actions, deserve action. Development at WestEdge should address both tidal and stormwater flooding.

These are the standards we’ve set for how we evaluate the options at WestEdge. We are open to other solutions that protect public health. Otherwise, we would be putting the community at risk for the sake of a drainage ditch on a landfill.

1) Advocated to bring the creek under the protections of the Clean Water Act, which required consultation with exposed communities.

2) Pushed the developer to add more wetlands to the project to help with flood control. We didn’t let the perfect be enemy of the good, and worked to improve the project.

3) Advocated for re-connecting the community to the rest of the city with pedestrian-friendly intersections for Hagood with Spring and Cannon.

Here’s what should happen next:

1) The city of Charleston made the mess, they are part owners of the WestEdge project, and they own the landfill. The city should seek broad input on how to remedy decades of under-investment, not just the technicalities of the WestEdge permit.

2) While this is a very local issue, fundamental federal laws apply. The Trump Administration weakened the bedrock protections that safeguard communities like Gadsden Green, through rollbacks of the Clean Water Act and other protections like the National Environmental Policy Act. We’re fighting these rollbacks, but defense is not enough. We would support action in Congress to strengthen environmental justice protections to address disproportionately exposed communities.

3) South Carolina needs to stand up. We cannot wait for Congress or a presidential administration to act. The South Carolina Department of Health and Environmental Control has an environmental justice working group, but—particularly with budget losses due to the pandemic—they may not have the necessary resources. DHEC needs the funding to do fill its mission of protecting and promoting the health of the public and the environment.