UPDATE: Over the past year, the Coastal Conservation League and the Southern Environmental Law Center (SELC) have been working with Sherwood Design Engineers, a San Francisco-based firm with extensive experience working on resilience projects around the country to analyze the Army Corps’ Draft Feasibility Report/Environmental Assessment (“EA”) for the Charleston Peninsula Coastal Flood Risk Management Study, also known as 3x3x3. Sherwood has compiled their recommendations and ideas for ways that the Corps can better utilize natural and nature-based solutions in their shoreline protection on the peninsula in a new report titled, Beyond the Wall.

Beyond the Wall provides a range of nature-based alternatives that address storm surge and other sources of flooding while delivering additional benefits such as recreational amenities. These alternatives are more in keeping with the character of the city than the proposed seawall, which would sever residents’ connection to the water. While this report only looks at three specific areas, the Battery, Lockwood Boulevard, and Rosemont, these areas are three places that represent ways to embrace a more natural approach where the Corps currently proposes a seawall or simply raising homes. However, the recommendations in each section can be applied to other locations within the Corps’ study area and should be viewed as part of the menu of potential ideas as the City of Charleston and Army Corps of Engineers continues to analyze and evaluate the best approach to perimeter protection around the Charleston peninsula. 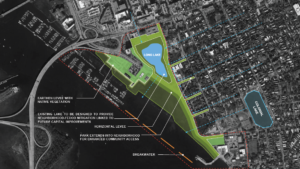 Thanks to the broad and diverse public engagement last year that advocated for a more thorough evaluation of the Corps’ seawall proposal, an Environmental Impact Statement (EIS) was initiated earlier this year. A draft EIS will soon be unveiled to the public for review and another round of public comments. We encourage people to review Beyond the Wall and submit comments during this engagement period to advocate for more natural and nature-based solutions to be incorporated in areas where that is appropriate and to abandon the Corps’ one-size-fits-all approach that considers only a concrete seawall around the peninsula.

Below are suggested talking points to incorporate into public comments for the upcoming draft EIS: 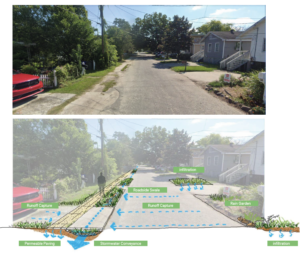 The Army Corps of Engineers has proposed protecting the city of Charleston from flooding caused by storm surge by encircling the city’s historic peninsula with an eight-mile seawall and building a 4,000-foot wave attenuating structure in Charleston harbor.

The nearly $2 billion proposal from the Corps, of which the city would have to pay just over a third, is focused solely one problem: defending the peninsula from storm surge. While storm surge is a major concern, Charleston faces many other flood threats that interact with and exacerbate damages in coastal storms. With a price tag this massive, the Corps should take a more holistic approach to flooding and should find solutions that create greater benefits for the community.

A year ago, the citizens of Charleston chose a broader approach than just a wall, adopting the “Dutch Dialogues” as guiding principles for living with water. The proposed wall design is inconsistent with the Dutch Dialogue principles, but we remain hopeful that this process and the discussions that will continue between the Corps, Charleston’s leaders, and, most importantly, the city’s residents will result in an approach that addresses the proposal’s shortcomings and results in effective solutions. The best way to ensure that outcome is to engage in a robust review that a proposal of this magnitude deserves.

With increasing frequency every year, the City of Charleston finds itself under water. We are on the front lines of a changing climate and sea level rise. Stronger and more frequent rain events, higher seas pushing water further inland with extreme high tides, dangerous storm surges from hurricanes, and groundwater inundation from a rising water table all contribute to one of the most urgent threats of our time: flooding.

Charleston is no stranger to catastrophic storms or flooding. Since its settlement by Europeans three-and-a-half centuries ago, man has tried to battle nature in an attempt to keep water from getting onto the land and flooding homes. Creeks and marshes have been filled, walls have been constructed, and massive tunnels and pump stations have been engineered to try and keep our city dry. And now, Charleston faces projects that amount to billions of dollars to try and keep up with this pace.

Corps of Engineers Proposes a Seawall around the Charleston Peninsula

In April 2020, the US Army Corps of Engineers released a draft feasibility report and environmental assessment to address coastal storm risk for the Charleston Peninsula. The initial comment period to provide feedback on the proposed project closed June 19th, 2020. A second comment period is slated for late in the first quarter of 2021.

This study is the result of the federal planning process referred to as the 3x3x3 process consisting of a study that costs $3 million to complete within three years and includes three concurrent levels of review. In Charleston, the Army Corps was tasked with identifying a buildable project to protect the peninsula from flooding caused specifically by storm surge.

Following 18 months of data collection, modeling, and analysis the Army Corps is proposing to construct a nearly eight-mile seawall around the perimeter of the peninsula approximately three feet higher than the current height of the High Battery seawall. The seawall would require at least five pump stations to be constructed to pump water outside the wall. In total, the project would impact nearly 111 acres of marsh.

Also included in the USACE recommendations is a 4,000-foot long breakwater located offshore by the Battery. In addition, nonstructural measures are being proposed to address nearly 100 houses located outside of the wall in the Rosemont and Bridgeview Village communities. The specific definition of nonstructural measures was not included in the report beyond potential options ranging from elevating, ‘floodproofing’, relocating, or buying-out homes.

In June, the Conservation League facilitated a webinar with our partners at Charleston WaterKeeper, Groundswell Charleston, Historic Charleston Foundation, Preservation Society of Charleston, and The Nature Conservancy to provide a platform for the public to hear from the Army Corps of Engineers and the City of Charleston about the 3x3x3 project. You can watch that recorded webinar by clicking here.

This proposed project is estimated to cost nearly $2 billion and would be the most expensive single construction undertaking in Charleston’s history, changing the city’s landscape forever. However, as currently planned, the project would go forward without the public engagement and thorough vetting of an Environmental Impact Statement, which is required for every other major infrastructure project.

It is imperative for the public to remain vigilant and engaged by providing comments at every possible opportunity to prevent this project from moving forward without thorough review of community, cultural, and environmental implications.

These are just a few of the reasons the Conservation League is concerned about the proposed project:

Charleston faces so many unique challenges to address flooding. This proposed project offers just one very expensive and impactful solution to address one type of flooding in one area of the city, but the reality is our entire city needs to mitigate and prevent flooding by utilizing multiple solutions.

Charleston residents, community leaders, elected officials, and the Army Corps must work together collaboratively to identify the kind of projects that are worth $2 billion dollars. We just don’t believe this is one as currently proposed.

Because a one-size-fits-all solution does not match the varied neighborhoods and fabric of the Charleston peninsula, the Army Corps should assess solutions on a neighborhood basis. This could help determine where a concrete wall is necessary and where nature-based solutions and other adaptation measures could serve a similar purpose. And where a perimeter defense system is truly the best option, such as along Lockwood Drive, the Army Corps should require that any hard structure serves multiple community benefits such as stormwater storage, a bike path, or park space.

Water is such an integral part of our Charleston identity. We cannot afford to lose sight of the sea. Only a year ago, Charleston chose to adopt the Dutch approach to living with water but unfortunately, this is not reflected in this narrowly focused and shortsighted study.

Wherever and whenever possible, the City of Charleston – and the greater Lowcountry – should be adapting to live with water by creating parks that can double as protective barriers against floodwaters, restoring former creeks, elevating structures, utilizing natural green infrastructure, re-naturalizing the floodplains, and determining where hard armoring may be necessary on a site-specific basis. This USACE peninsula study does not meet the standard it should in order to address the urgent threats the City of Charleston faces in the short and long term.

With your engagement, we can do better, and we will. Please continue to stay engaged by following the Conservation League as we keep you informed throughout this process.