In 2020, the Conservation League partnered with the Southern Environmental Law Center to commission the town planning firm Dover, Kohl & Partners to develop several alternative designs for the property demonstrating better ways that Cainhoy could be developed resiliently while minimizing impacts to cultural resources, threatened and endangered species, and wetlands. While we do not support or endorse any development of this tract, the report demonstrates that the proposed Cainhoy development submitted by the developers to the Army Corps of Engineers is not the least damaging alternative, as required by law. We have submitted this analysis to the Army Corps of Engineers and a copy has also been provided to the City of Charleston to better guide how they plan for future growth in this area. Given the extreme impacts the proposed development would have, we believe the proposal should be thoroughly evaluated with an Environmental Impact Statement before any federal permits are issued. 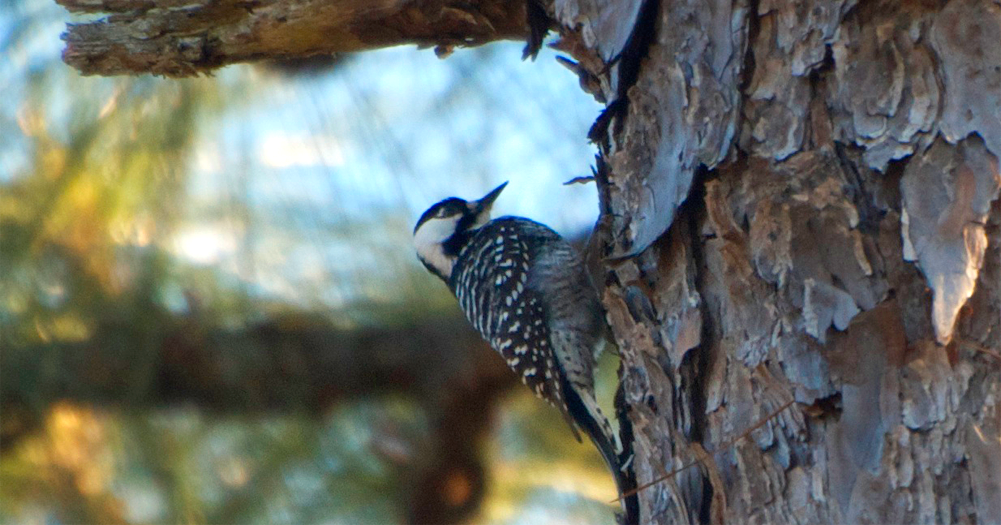 The red-cockaded woodpecker makes its home in mature pine forests. Longleaf pines (Pinus palustris), which are plentiful in the Cainhoy Property, are preferred.

This 9,000 acre tract contains significant ecological and historical assets that will be destroyed or endangered by the development schematic outlined in the plan currently proposed by the owner. There are approximately 5,800 acres of upland and 3,200 acres of wetlands and marshes on the property. The approximately 4,500 acres north of Clements Ferry Road are primarily freshwater wetlands and Longleaf pine forests, while the southern portion is primarily uplands with young stands of loblolly pines and saltwater wetlands. With over 10 linear miles of marsh and wetland frontage on the Cooper and Wando Rivers and Beresford and Flagg Creeks, Cainhoy is rich with environmental, historical, and cultural treasures. Cainhoy shares a two-mile border with the 250,000-acre Francis Marion National Forest (“FMNF”), which is home to nine endangered and threatened animal species, eight endangered and threatened plant species, 15 sensitive animal species, and 43 sensitive plant species. A broad plateau of old-growth Longleaf pine forest, some 40 feet in elevation, stretches from the FMNF across the northern portion of the Cainhoy property, providing habitat for 16 endangered Red-cockaded woodpecker (“RCW”) colonies and populations of Gopher Frogs and Flatwoods Salamanders. The developer is requesting to the Army Corps of Engineers a permit to impact more than 180 acres of wetlands to accommodate a development that would locate nearly half of the proposed residential units within the 100-year floodplain.

Without a full-scale environmental study in the form of an EIS, the presence of these species on Cainhoy, as well as the impacts that will result from the proposed development, will remain largely ignored and unmitigated.

In 2014, the property owners received approval from the City of Charleston for a rezoning, in the form of a Planned Unit Development, of the entire 9,000 acres consistent with the proposed Master Plan enabling up to 18,000 residential units to be built on the property. In 2016, the Berkeley County School District completed construction of a high school and elementary/middle school on the southern portion of Cainhoy. The developer also completed its first phase of development near Clements Ferry Road in 2019, which was allowed to take place on a portion of the property that would not be impacted by any wetlands.

In light of the pace at which permitting is moving forward, it is clear that the National Environmental Policy Act and the Endangered Species Act require a full-scale environmental review of the entire 9,000-acre project before irreparable harm is done to the valuable historic, environmental, and cultural resources on Cainhoy.