The best way to solve the traffic problem is to take cars off the street by increasing options for mass transit. The Conservation League supports additional funding and capacity for the Charleston Area Regional Transportation Authority (CARTA) for the implementation of Lowcountry Rapid Transit, our local take on the Bus Rapid Transit (BRT) system that cities across the United States and around the world have implemented with great success.

What is Lowcountry Rapid Transit?

Lowcountry Rapid Transit is a new model for mass transit in our community, and will be the first mass transit in the state of South Carolina! Compared to other forms of mass transit like light and commuter rails- bus rapid transit is the most flexible and cost effective option for the current scale and density of the Lowcountry region (for example, only 1 mile of light rail track could be built for the cost to construct 5.5 miles of BRT lanes). The Lowcountry Rapid Transit project will transform the infrastructure in our region to improve mobility for people on public transportation, in cars, on foot and on bikes, and will be a catalyst for economic growth and prosperity throughout the area.

How Will it Function?

The Lowcountry Rapid Transit vehicles will operate along fixed or dedicated lanes for more than half- approximately 52% of the 21.5 mile corridor from Ladson to downtown Charleston. In these dedicated lanes, the system will function similarly to light rail (without the rails). Dedicated lanes along the BRT corridor allow the vehicles to move faster than single-occupancy automobiles that get caught in traffic.  In the sections of the corridor where it is not feasible to construct dedicated lanes, BRT vehicles will operate in mixed traffic utilizing traffic light synchronization giving BRT vehicles the green light as they approach intersections and allowing them to communicate with emergency and service vehicles to increase traffic flow around the region.

The BRT vehicles will arrive at each station every 10 minutes during peak service hours and the stations will be located in the medians of roadways allowing the vehicles to pull up and quickly load prepaid passengers just like a subway or light rail system. Certain stations will be be designed to accommodate park and ride features or serve as transit hubs where riders can connect with local CARTA buses. Construction of the project will include infrastructure upgrades along the route like curbs and medians for increased pedestrian safety and added crossings. New bicycle and pedestrian accommodations and added connections to existing neighborhoods and street networks will play a key role in helping to take cars off the road reducing traffic congestion.

Where Will it Go? 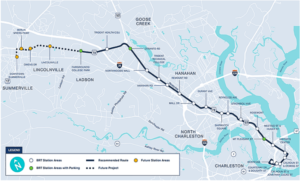 The proposed route for the first phase of the Lowcountry Rapid Transit system will run along US 78/52 (Rivers Avenue) between Ladson and downtown Charleston with approximately 20 stops for a total commute from start to finish taking about 60 minutes to complete. The refinement of exact station locations and design details are still being finalized, but the project team has identified the starting station location at the Ladson fairgrounds and the terminus at the WestEdge near the medical district along Line Street in downtown Charleston. Phase two will extend the line to downtown Summerville and corridors throughout Charleston, Berkeley, and Dorchester Counties have been identified for future connecting lines.

What are the Benefits?

The entire BRT vehicle fleet will be electric, eliminating harmful greenhouse gas emissions that contribute to climate change and degrade air quality in our communities. Compared to traditional diesel buses, the BRT vehicles are estimated to contribute to:

The stations will be centered around areas of interest and employment centers which helps take cars off the road by giving people options to walk or bike to work, entertainment, and convenience goods and service centers. This type of deliberate station location planning is called Transit Oriented Development (TOD) and is crucial to the success of the project, particularly in the City of North Charleston which is the geographic center of the Charleston metro region. With so much growth planned for this area, it is paramount that the urban core is well planned, functional, and livable for diverse demographics. Conscious, transit-oriented development around the Lowcountry Rapid Transit corridor includes access to healthy local food, increased conservation of open space and wetlands, connectivity between existing neighborhoods, parks, and to transit corridors, increased resilience and natural infrastructure, and targeted infill redevelopment sites for mixed use and affordable housing opportunities.

Where Are We in the Process?

Our region has already taken several steps towards making Lowcountry Rapid Transit a reality. Charleston County included $600 million for mass transit in the half-cent sales tax referendum that passed in November 2016. The Berkeley-Charleston-Dorchester Council of Governments (BCDCOG) applied for federal matching funds, and completed a 15-month study to identify a 22-mile corridor for Lowcountry Rapid Transit along I-26, from Summerville to Charleston. More about the study is here.

Now the project team is working to acquire competitive federal grant funding. The NEPA coordination process- a federal framework required for infrastructure projects to ensure the public is informed and involved in all environmental considerations and the decision-making process is also underway for the first phase of the project.  This process allows the project team to learn as much as possible about the local area and communities in order to reach a decision that best meets the needs of the community and minimizes or avoids impacts to the environment and communities.

As of fall 2020, the project team is coordinating meetings with City of North Charleston and City of Charleston to identify priorities in design and station area planning. In early 2021, the next round of public meetings will be held before developing corridor visuals for public consumption. After that, station design details will be finalized and the (NEPA) documentation for the defined project will follow. Then will come the refinement of capital cost estimates, run time assumptions, and ridership forecasts before the project breaks ground. The project is on schedule to be submitted to the Federal Transit Administration by September 2021 to enter the Engineering phase of the project.

Stay up to date with the progress of the Lowcountry Rapid Transit system on the project website. Keep in mind that the initial spine from Ladson to the Peninsula is only the first phase of a much larger project that will evolve into a comprehensive transit system for the entire region. Check out the Berkeley-Charleston-Dorchester council of governments’ Long Range Transportation Plan to see future priorities and transit recommendations, starting on page 208.