The 23,828 acre Ashley River Historic District corridor, listed on the National Register of Historic Places, represents more than 300 years of cultural and ecological significance for its association with the Lowcountry’s inland and tidal rice cultivation history, the Civil War, Post-Reconstruction Era phosphate mining industry, and the history of African Americans from slavery to freedom in Charleston. Stretching north for approximately twelve miles along the Ashley River from Church Creek in Charleston County to Bacon’s Bridge Road in Dorchester County and south to County Line Road, the corridor includes historic plantations and gardens, rural landscapes, churches, residences, and archaeological sites.

Development pressure from the City of Charleston and Town of Summerville have long made the historic Ashley River corridor an incredibly vulnerable resource that the Coastal Conservation League, its conservation and preservation partners, and local landowners have spent decades collaboratively working to protect. In 2018, the National Trust for Historic Preservation included the Ashley River Historic District to both their 11 Most Endangered Historic Places list and their National Treasures program. 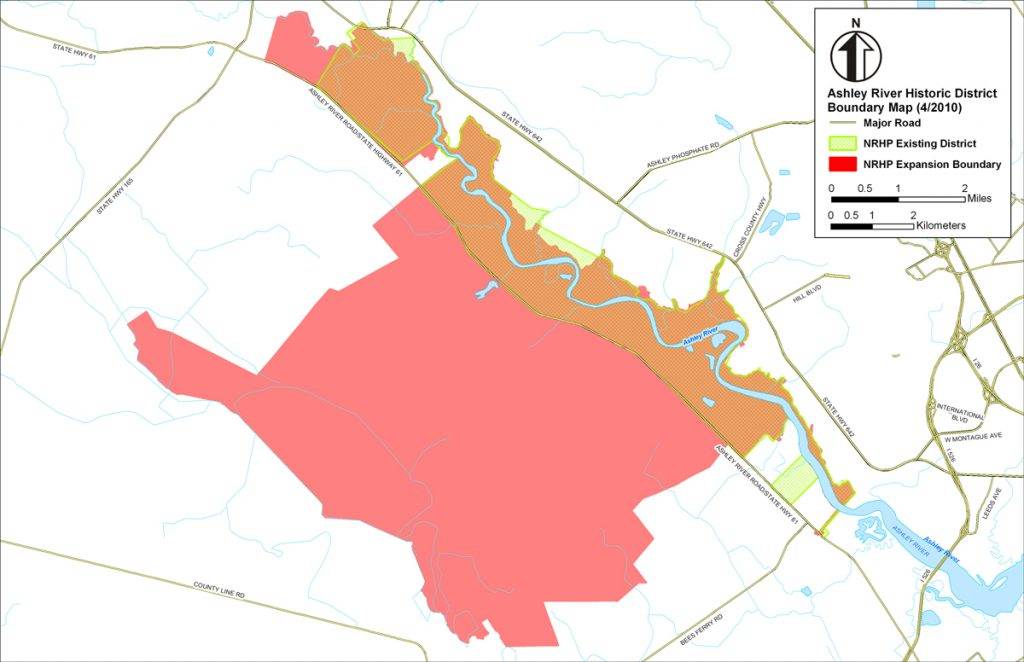 In 2003, MeadWestvaco Corporation (now WestRock) sold the 4,500-acre Poplar Grove timber tract to a developer seeking to build 5,000 homes on the site. Located on County Line Road straddling Charleston and Dorchester Counties, this development proposal would have encircled the the rural corridor with suburban development. Further, the scale of the proposed development on land with copious wetlands would have required adding sewer and water through either annexing into the Town of Hollywood or convincing Dorchester County to extend their system south from Summerville.

In 2004, while the Town of Hollywood was considering annexing Poplar Grove and local residents engaged in a well-organized opposition campaign to the development, the League worked with Ducks Unlimited (DU) and other conservation partners to present an alternative to building on the entire 4,500-acre tract: $10 million in exchange for a conservation easement on 3,000 of Poplar Grove while retaining the development rights for a scaled-back 400 homes on 1,000 acres and sell the remaining property in tracts of 100 acres or larger.

Without having $10 million on-hand to solidify the deal, the League, DU, and its conservation partners sought funding from organizations like The Donnelley Foundation and and the S.C. Conservation Bank promising to match the 3,000 acre Poplar Grove easement with an additional 10,000 acres from surrounding property owners, including Uxbridge, Millbrook, and Middleton Plantations to be placed under easement.

Thanks to the savvy negotiation skills of our partners and the generosity of The Donnelly Foundation and other financial contributors, the Poplar Grove developers accepted the deal and 13,000 acres were protected through conservation easements.

In 2013, the developers of Poplar Grove tried once again to convince the Town of Hollywood to annex 750 acres of undeveloped land zoned Resource Management (1 unit per 25 acres) and AG-10 (1 unit per 10 acres). If annexed, the proposed development agreement would have rezoned the property R-2 (7 units per acre), multiplying the allowable density by 175 times. Further, the development agreement would have forced the Town to sell half of all their sewer taps, eliminating the option for current Hollywood residents on septic to hook up to the Town’s sewer system.

Hollywood Town Council unanimously voted to deny the proposed development agreement in November 2013, and the developer withdrew the annexation petition and abandoned plans to build thousands of homes on the site. 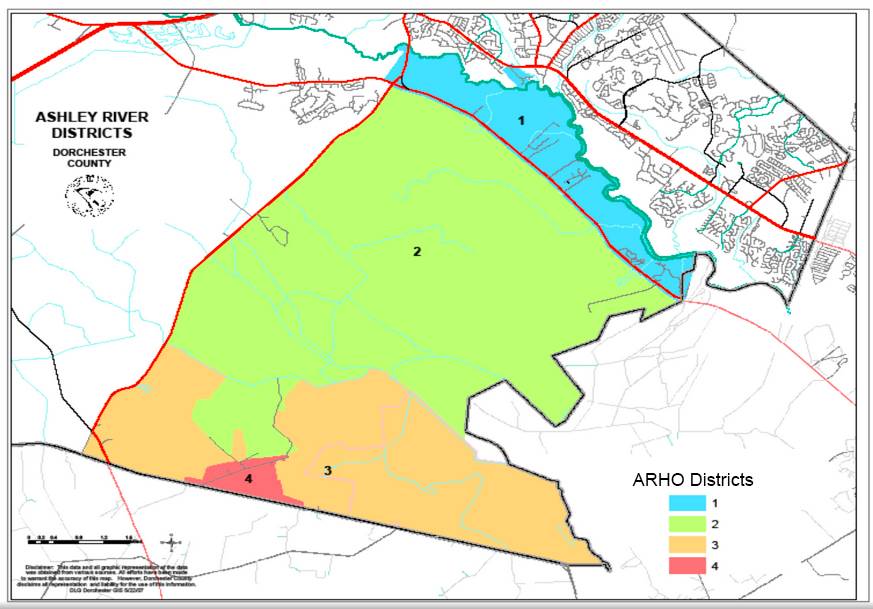 During the process to protect Poplar Grove, Dorchester County Council members acknowledged the significance of the district and the importance to protect this portion of their county. A committee of county residents was established to develop a new zoning code for this area that would protect the traditional land uses and rural characteristics.

In 2007, Dorchester County Council adopted an ordinance that created the Ashley River Historic Overlay (ARHO) District, with the intent of promoting responsible development and mitigating the effects of new construction within the district by limiting the density and creating buffers within three districts of the overlay.

In the midst of the Poplar Grove negotiations in 2004, MeadWestvaco sold an additional 6,654-acre tract of timberlands in the center of the Ashley River Historic District, adjacent to Middleton Place, known as Watson Hill.

Because Dorchester County had not created its new Ashley River Historic Overlay (ARHO) District when this parcel was annexed, it did not have any zoning limitations. The new owner of the tract proposed to build up to 5,000 homes and condominiums, a golf course, two schools, a fire station, and a 250-acre office and business park.

After the creation of the ARHO District in 2007, the League wanted to make sure that Watson Hill was developed under Dorchester County’s new zoning overlay, which would significantly curtail the developer’s plans.

The Battle to Annex the Historic District

In an effort to get around Dorchester County’s new ARHO District density restrictions, the developers of Watson Hill secretly purchased 68 acres of land extending from Highway 61 to the Ashley River, called the Barry tract, creating contiguity with the City of North Charleston via the King’s Grant golf course east of the Ashley River all the way to Watson Hill.

The developers struck a deal with the City of North Charleston to annex the Barry tract and Watson Hill to avoid Dorchester County’s zoning overlay and utilize North Charleston’s inappropriate suburban zoning code.

The Conservation League responded to this action by encouraging the Barry family to retract their real estate contract and partnered with our local preservation partners to raise $1 million to indemnify the Barry’s if the buyer sued for breach of contract, which they did.

With the Barry tract purchase pending in the courts, the Conservation League developed an annexation strategy to counter North Charleston. Working with the City of Charleston and Town of Summerville, the League collected petitions from every property owner along Highway 61 to collectively annex a continuous string of parcels creating a “municipal wall” to block North Charleston from annexing Watson Hill.

The City of North Charleston ultimately prevailed in the courts and the developers of Watson Hill resubmitted a scaled-down development plan. This plan collapsed when the economy crashed and the property was foreclosed.

Five years after MeadWestvaco sold Watson Hill, they ultimately bought back the property at a court-ordered foreclosure auction. In 2017, Ken Seeger, president of Community Development and Land Management Group for WestRock (formerly MeadWestvaco) placed conservation easements on the majority of Watson Hill on his last day before retirement, effectively closing the book on one of the Ashley River Historic District’s greatest sagas.

In October 2017, the City of North Charleston annexed three parcels totaling approximately 114 acres of riverfront adjacent Magnolia Plantation. This land is part of the once larger Runnymede Plantation.

In early 2017, Charleston County amended its Special Events ordinance limiting the number of events that can take place on a property per year as well as their size. The owner of the Runnymede parcels operate a commercial events venue on the property and wanted to be able to continue hosting events without having to go through Charleston County’s new approval process. The land is contiguous with North Charleston and the owner could voluntarily annex into the municipality without requiring a public hearing.

Initially, the City of North Charleston was going to rezone one of the parcels B2, which is the equivalent to General Business, allowing unlimited use and density. The League quickly engaged its partners and neighboring landowners to develop the best course of action. Knowing that there was not a legal mechanism to stop the annexation, we focused on correcting the zoning to reflect Charleston County’s rural AG-8 zoning, which limits density to 1 unit per 8 acres.

The League worked closely with North Charleston city staff and communicated extensively with City Council members to emphasize the significance of the historic district and importance to have the zoning reflect the surrounding rural context. Ultimately, the City of North Charleston threw out their initial B2 zoning proposal and established a new AG zoning code that would limit density to 1 unit per 4 acres and still allow the owner to host special events on the property.

Following the annexation of the riverfront parcels, the landowners donated an acre of land on a 2,200-acre tract of land they own on the west side of Ashley River Road to the City of North Charleston. North Charleston accepted the parcel claiming it would be used for public services like a police or fire station, however, this land donation raised a red flag that the city and landowners might have an ulterior motive since the City could have provided a public service station on the riverfront parcel. This land is not contiguous with North Charleston’s municipal jurisdiction because the National Trust for Historic Preservation owns a 100-foot wide strip of land along Ashley River Road that is with in the City of Charleston’s jurisdiction. However, the City of North Charleston claim they can legally annex the 1-acre parcel because it is adjacent to Runnymede Plantation.*

If North Charleston is ultimately able to legally annex the 1-acre parcel, it would create contiguity with the larger 2,200-acre tract. In an attempt to prevent North Charleston from annexing the 2,200 acres west of Ashley River Road, nearby landowners petitioned the City of Charleston in December 2017 to be annexed under the State of South Carolina’s 75% annexation method forcing the 2,200-acre parcel to be annexed as well. Upset by the City of Charleston’s acceptance to hold a public hearing to consider the 75% annexation petition, The City of North Charleston and the Runnymede landowner subsequently did their own counter annexation of the parcel in December 2017, opening the door to another round of annexation battles in the Ashley River Historic District.

The National Trust for Historic Preservation and the City of Charleston are engaged in ongoing litigation with the City of North Charleston and the owners of the Whitfield tract regarding the illegal annexation of the 1 acre parcel. The Coastal Conservation League is partnered with the National Trust and other preservation and conservation groups to seek permanent ways to protect the Ashley River Historic District. 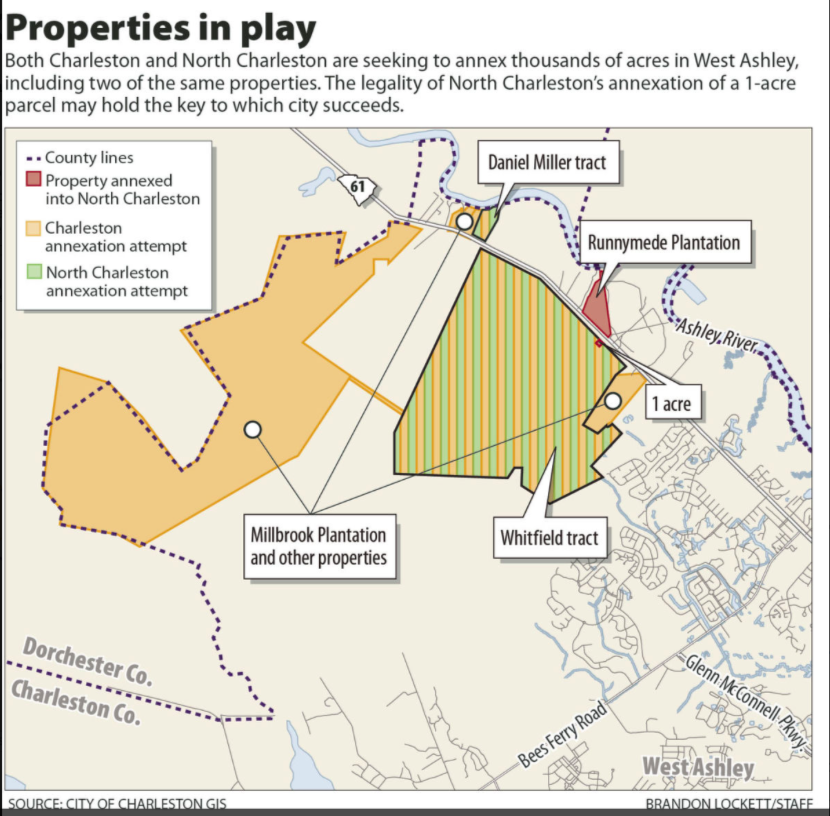