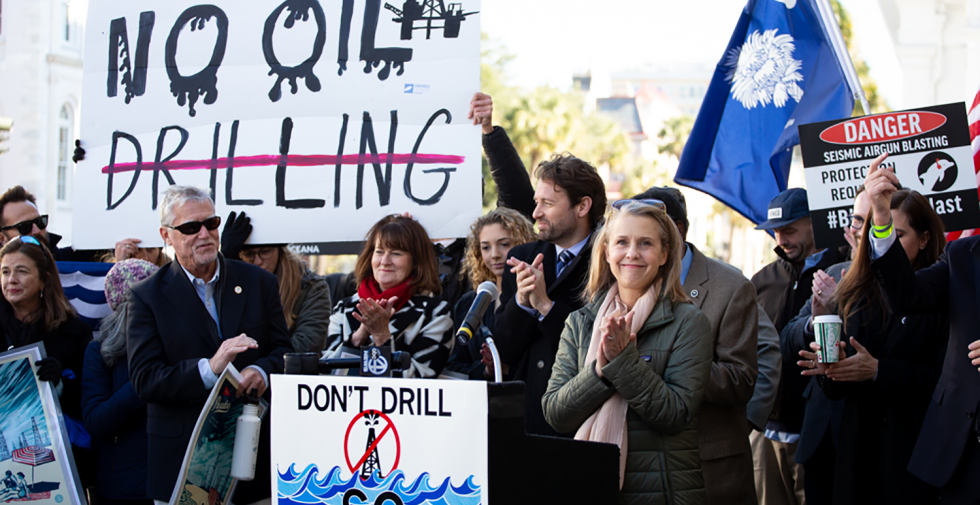 CHARLESTON, S.C.  — A status conference on seismic litigation revealed today the industry will not pursue efforts to employ seismic blasting to search the Atlantic Ocean for offshore petroleum deposits this year, and possibly for several years.

The hearing marked a victory for dozens of organizations and thousands of coastal communities and businesses in a years-long legal and public battle challenging the government’s issuance of Incidental Harassment Authorizations, or IHAs. Those authorizations were needed because the air-gun bombardment of the sea floor would have hurt ocean animals, including the critically endangered North Atlantic right whale.

“Seismic blasting harms whales in the search for offshore oil that we should leave in the ground. We can’t allow the oil industry’s greed to threaten endangered North Atlantic right whales and other vulnerable species,” said Kristen Monsell, ocean legal director with the Center for Biological Diversity. “We’re happy these animals will have a reprieve from this unjustified acoustic attack on our oceans. We’ll keep fighting to ensure the oil industry stays out of the Atlantic.”

“We are at a crucial time for the last remaining 400 North Atlantic right whales on the planet,” said Alice M. Keyes, vice president of coastal conservation for One Hundred Miles. “Seismic blasting in the Atlantic would sound the death knell for this magnificent species. We are proud to stand alongside hundreds of thousands of Georgians and East Coast residents who have fought against seismic blasting for the protection of our marine mammals, fisheries, and ocean-dependent economies.”

“The end of Atlantic seismic testing for the foreseeable future is a much-needed reprieve for marine life, including the critically-endangered North Atlantic right whale,” said Jane Davenport, senior attorney at Defenders of Wildlife. “However, until there is an outright ban on offshore oil and gas drilling along the East Coast, we will continue to fight against this disruptive and dangerous practice.”

“Seismic surveys are the precursor to offshore drilling, but these waters are far too important to sacrifice to Big Oil.  There’s no need to risk irreplaceable marine wildlife just for potential information about oil deposits that should never be drilled in the first place,” said Earthjustice Managing Attorney Steve Mashuda. “We’re grateful there will be no airgun blasting in the near future and will keep up the fight to make sure it stays that way.”

“We are relieved that the threat of seismic testing and its damage to marine wildlife is at least temporarily lifted,” said Laura Cantral, executive director of the Coastal Conservation League. “It’s vital that we use this pause to secure a permanent ban on offshore energy exploration activities and drilling in South Carolina and adjoining waters, and finally put an end to the unacceptable risk it poses to our economy and environment.”

“There will be no seismic blasting this year, and none of the senseless harm that would bring to our whales and fish and coastal communities, but the Trump administration has left the door open to new proposals from industry,” said Michael Jasny, director of the Marine Mammal Protection Project at NRDC, “The only way to end the threat is to prohibit offshore oil and gas exploration for good.”

“Communities can breathe a little easier knowing the Atlantic is now safe from seismic airgun blasting in 2020. Today’s much needed news is a bright spot and in line with the court of public opinion. Over 90 percent of coastal municipalities in the proposed blast zone are opposed to opening our coast to offshore drilling and its dangerous precursor, seismic airgun blasting. The expiration of these unlawful permits will finally protect coastal communities and our marine life. Oceana has been campaigning for more than a decade to protect our coast from dirty and dangerous offshore drilling activities. We are going to do everything in our power to permanently protect our coasts and ensure dynamite-like blasting never starts,” said Diane Hoskins, Oceana campaign director.