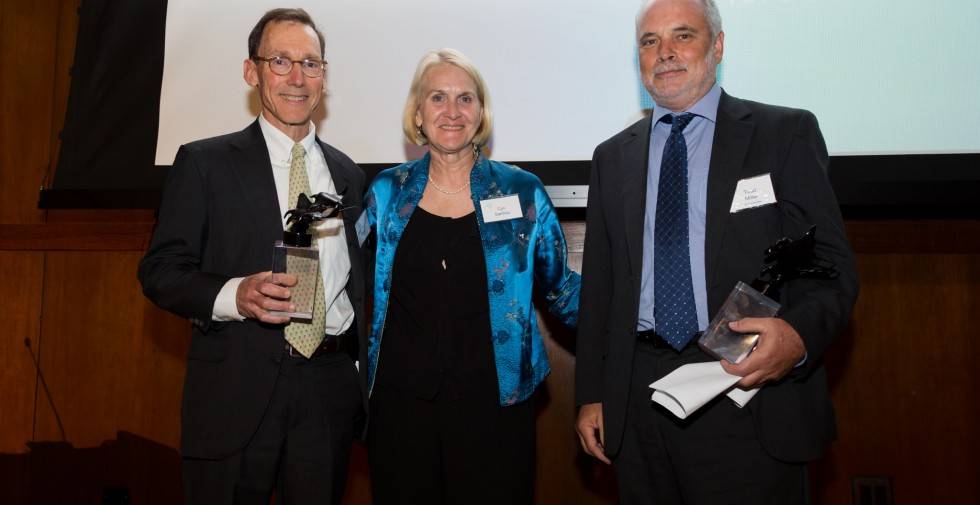 WASHINGTON, DC — Coastal Conservation League Director Dana Beach will be honored along with H.S.H. Prince Albert II of Monaco and U.S. Secretary of State John F. Kerry, among others, at the 2015 Peter Benchley Ocean Awards ceremony tonight at the Carnegie Institution for Science at 1530 P St., NW, Washington, DC. The world’s preeminent ocean honors are named after the late author of Jaws and lifelong marine conservationist Peter Benchley.

“I am honored and humbled to have received the Benchley award,” said Beach. “The health of the oceans, the health of the land, and the health of our communities are inextricably intertwined. The next decade will determine whether we successfully rise to twin challenges of dealing with unprecedented population growth and averting the most severe impacts of climate change — challenges to which each of us must contribute our time and our creativity.”

A VIP reception begins at 5 pm followed by the awards ceremony at 6 pm and the dinner at 7:30 pm.

The awards program was co-founded by Wendy Benchley, an ocean conservation and policy advocate, and David Helvarg, author and executive director of Blue Frontier. Often referred to as the “Academy Awards” for the ocean, the Benchley Awards recognize excellence across a range of expertise, including national leadership, policy, science, media, youth and grassroots activism.

Prince Albert will attend the ceremonies. Due to official business, Secretary Kerry is unable to attend.

During the 8th annual awards ceremonies, Prince Albert will be presented with the Award for Excellence in National Stewardship.

Prince Albert is a fourth generation ocean champion, who frequently takes part in marine scientific expeditions to observe the ocean’s most pressing challenges. He is the only Head of State ever to travel to both poles. In 2006 he established the Prince Albert II Foundation, which is dedicated to protecting the ocean and the environment, as well as addressing key threats such as climate change and ocean acidification.

Secretary Kerry will be honored with the award for Excellence in Policy. Accepting on his behalf will be U.S. Sen. Ed Markey, D-Massachusetts and Benchley award winner for policy in 2013.

This year’s award winners include:

Dr. Daniel Pauly for Excellence in Science; considered a science rock star in the field of global fisheries, he is the founder of “Sea Around Us” project at the University of British Columbia and a preeminent authority on the threat overfishing poses to food security.

The Economist for Excellence in Media. The Economist has dedicated a significant amount of its news coverage to the growing and varied challenges facing the world’s oceans and is encouraging the creation of a “blue economy” where economic opportunity and growth are balanced by responsible investment in a sustainable ocean. Accepting for The Economist is Charles Goddard, editorial director, Asia Pacific.

Todd Miller for Hero of the Seas; founder of the North Carolina Coastal Federation, which works to enhance the environment and economy of the state’s coastline.

Dana Beach for Hero of the Seas; founder of the South Carolina Coastal Conservation League, which works to protect the state’s beaches, marshes, pine savannahs and marine wildlife.

Nainoa Thompson for Excellence in Exploration; a native Hawaiian voyager and president of the Polynesian Voyaging Society, who is the first Hawaiian in seven centuries to practice the ancient Polynesian art of long-distance navigation known as “way finding.” U.S. Sen. Brian Schatz, D-Hawaii, a powerful voice for marine protection, will present the award.

Madison “Pip” Stewart for Christopher Benchley Youth Award; an ocean activist since the age of 8, she has spent more than a decade protecting sharks in waters near her Australian home. She is the subject of an award-winning Smithsonian documentary, “Shark Girl.”