Strange bedfellows is the theme of the week on transportation. Five groups that don’t ordinarily jeehaw (to use a fellow conservationist’s favorite term) gathered in Columbia on Wednesday to express their agreement on the overriding importance of getting politics out of the road funding arena before raising the gas tax. The S.C. Policy Council, League of Women Voters, S.C. Campaign for Liberty, American’s for Prosperity and the Conservation League urged legislators to develop transportation reform legislation over the summer, in the wake of the session’s failure to agree on a transportation package this session.

We offered as evidence the waste of $150 million to four-lane S.C. 51 from Florence to Pamplico. Below is Georgetown office director, Nancy Cave, sleeping in the middle of highway 51 at rush hour. 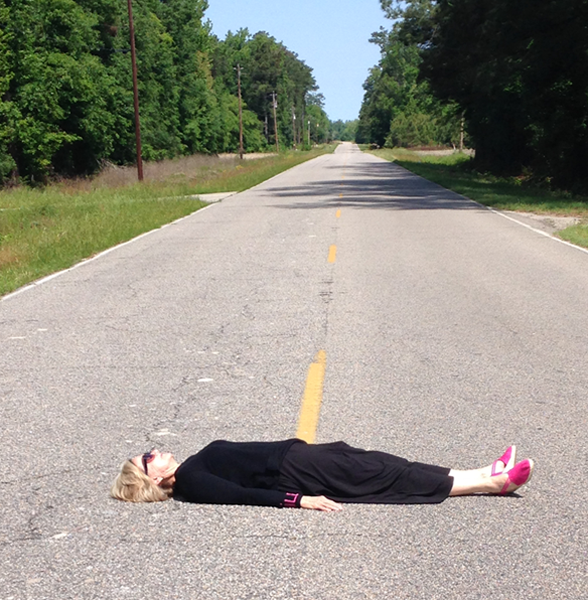 These boondoggles are not simply aberrations. They are current and continuing diversions of tax dollars, facilitated by the existing structure of decision-making. And yet, a large number of elected officials support additional taxes no safeguards to insure the money is spent on state transportation priorities.

The State reports that the S.C. Department of Health and Environmental Control (DHEC) board refused to reverse the staff decision to allow seismic testing. There are (at least) two items in Sammy Fretwell’s article that should send shivers down your spine. The first is “minimal discussion,” describing the board’s deliberation during the appeal.

The second was the comment from Spartanburg board member Clarence Batts that “this (appeal) appears to be more emotional involvement than factual involvement,” and that seismic testing has been done for years with no harm to marine life. This is dangerous, and willful, ignorance — and completely at odds with reality and scientific evidence. The board failed to do even the most minimal review of the facts regarding the impacts of this exploration technique, which entails firing explosions at intensities 100 times the level of a jet engine every 10 seconds, continuing over the course of months. If there were ever an indictment of the capacity and inclination of our state environmental agency to evaluate critical environmental protection questions, this is it.

This Post and Courier editorial describes the board’s actions as “outrageously dismissive.”

But… there is good news in Bluffton! As Savannah Now reports, Sun City has providentially lifted the ban on rooftop solar panels, positioning that retirement community to lead the way toward a cleaner energy future in the state.

Finally, local food hubs hit the big time, with an excellent article in the Huffington Post. The piece reports on the challenges operations like the Conservation League’s GrowFood Carolina face in their endeavors to expand the availability of fresh, healthy food, while stabilizing rural land and reinvigorating rural communities.

The short story is that food hubs are not an easy business, nor are these operations guaranteed to succeed. The author notes that they need three things: patience, considerable business skill, and discipline. GrowFood is experiencing its best year yet. It’s clear that the GF team, led by the talented and patient Sara Clow, has exhibited these attributes over the past three and a half years, making GrowFood one of the most successful new food hubs in America. Ask for GrowFood products where you shop and dine!