Last week the good news was about the resurgence of monarch butterflies on their wintering grounds in Mexico. This week, it’s the lithe monarch’s antipode, the Florida manatee, as the Washington Post reports. Once threatened with extinction, the population of this peaceful, herbivorous resident of Florida’s freshwater springs, (and, increasingly, South Carolina’s coastal waters), has grown from several hundred in the 1970s to roughly 6,000 today. The manatee’s rebound is the direct result of conservation efforts, which are a direct result of the animal’s designation as federally endangered, in case anyone doubts the importance of the Endangered Species Act and other federal environmental laws.

In South Carolina, we have many endangered species. One that is not included on the federal list, but perhaps should be, are facts, and their similarly illusive cousin, logic. Sammy Fretwell, with The State, interviews people in Georgetown about offshore oil drilling.

One leader of the pro-drilling effort is a fellow named Bill Crowther, president of the Atlantic Energy Alliance. Mr. Crowther says, “The port of Georgetown has the opportunity to become the energy support base for the entire East Coast,” in spite of its shallow harbor. He compares it to Port Fourchon, La, which, he says, also has a shallow harbor. When I googled Port Fourchon, this picture came up. 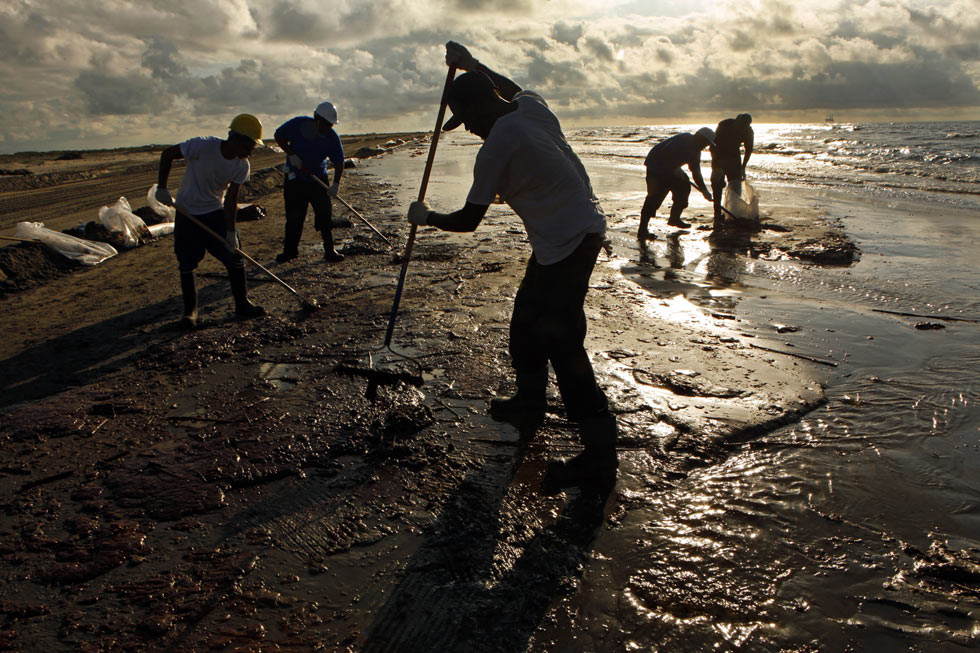 For additional images of the spill’s impact on the Gulf Coast, look at this piece in the Los Angeles Times. And then think about Cape Romain, Winyah Bay, the ACE Basin and the Broad River.

Not to worry, says Mr. Crowther of Georgetown, the rigs would be 50 miles offshore. Therefore a spill would not affect the South Carolina coast. I googled the location of the BP Deepwater Horizon rig — 41 miles offshore. Seriously, if this is what passes for informed analysis and advocacy, we are in big trouble.

In contrast to Mr. Crowther, a former automobile executive from the upstate, Peg Howell, of North Litchfield Beach, actually worked in the oil industry as an oil rig boss with Chevron. Ms. Howell has compiled extensive evidence, based on personal knowledge and experience, against drilling. According to the article, “(Her) document says every area of the U.S. coast where drilling has occurred has experienced multiple spills that caused billions of dollars in damages.”

The federal agency regulating offshore drilling will open another round of comments within a month. Make sure you copy Governor Nikki Haley on whatever you submit.

“It has been said that democracy is the worst form of government, except for all those other forms that have been tried from time to time…” Winston Churchill.

The following articles, from The State, the Greenville News, and the Post and Courier, pertain to last week’s imperfect, but important decision by the South Carolina Senate to reform transportation spending. The Senate agreed to a compromise that gave the governor appointment power to the Department of Transportation Commission, empowered the DOT to veto State Transportation Infrastructure Bank projects, and directed $400 million in general funds to road maintenance and repair. (Yes, maintenance and repair, not boondoggles, according to DOT Secretary Christie Hall, as reported by Tim Smith with the Greenville News.)

It was ugly. It was acrimonious. It got personal. And it didn’t go far enough. But it was a seismic change in a state that for 300 years has protected and expanded the power of the Legislature, (really, four people in the Legislature), at the expense of the Executive Branch and of bona fide representative democracy. We will see how this unfolds this week as the Senate approves the compromise and the bill moves into a conference committee.

The State explains why the Republicans are happier with the process than the Democrats. (In large part because after the filibuster ended, the Senate leadership limited further debate on the bill.)

And the Post and Courier reports a variety of responses to the agreement.

Have a great Monday!