Adventures with Andy: Earning a Certification to Sell Wild Mushrooms 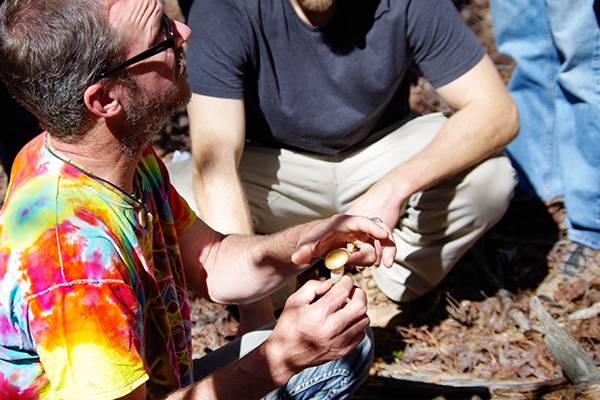 I snap a photo just as Tradd says, “This mushroom really turns me on.” He pauses at the sound of my camera’s shutter, adding, “Don’t add that to your article.”

He continued on, explaining to about 20 students (including me) standing around him that a mushroom he has just picked from a hardwood log is called a “train wrecker.” The fungus is so named because of its ability to grow even in creosote or tar-treated lumber – the kind of lumber used in railroad ties.

It’s early April, and we are all gathered in Sesquicentennial State Park to attend the Five-Year Wild Mushroom Safety Certification course, taught by Tradd Cotter. Together with his wife, Olga, Cotter runs Mushroom Mountain, a farm focused on cultivating mushrooms. Over the next two days, we will learn about 20 species of mushrooms approved for retail sale in South Carolina, mushrooms to avoid, tools to help identify mushrooms, mushroom toxins and treatments, and protocols for record-keeping and storage of wild foraged mushrooms for retail sale.

Throughout the year, Cotter teaches the certification course across South Carolina. He is a wild mushroom foraging and cultivation expert and possesses an exceptional ability to find wild mushrooms, as demonstrated by the giant pile of golden morels he’d collected quickly on his way down from Greenville. The morels were piled on a table in the lecture hall where he conducted the classroom portion of the course. Other tables in the room display oyster and lion’s mane mushrooms cultivated by Cotter.

Cotter is currently the only person in the state approved to certify others to collect wild mushrooms for retail sale. South Carolina only recently began allowing the sale of wild foraged mushrooms, thanks to Cotter’s work and the help of the Conservation League and GrowFood Carolina, who worked with industry experts, food safety specialists and other stakeholders to update the DHEC’s retail food establishment regulations in 2014. The state’s first Wild Mushroom Safety Certification was held at Charleston’s Caw Caw Interpretive Center in the summer of 2014. Today, Cotter has trained about 100 foragers.

Following in South Carolina’s footsteps, North Carolina and Georgia have established their own wild mushroom foraging programs, and Cotter’s certification course allows permitted individuals to forage and sell mushrooms in all three states for five years. Several courses are held throughout the year and in different parts of the state. To learn more, check out Mushroom Mountain’s website at www.mushroommountain.com.

Cotter’s course was a great experience, and I am now certified to sell wild forged mushrooms in South Carolina, North Carolina and Georgia. Plus, I have found that selling foraged mushrooms through GrowFood is so easy. I simply drop off my mushrooms at the warehouse, and the GrowFood team sends me a check in the mail once they sell. The chanterelles have been great this year!

A Word from the Warehouse - October 2017