It’s that time of year, the time to take stock of the past 365 days and make resolutions for the new year. We’re hoping that in 2020 communities will work to reduce their dependence on toxic rat poisons, known as anticoagulant rodenticides. This year, we learned that South Carolina wildlife is suffering from exposure to these toxic chemicals. A bobcat on Kiawah Island died from rodenticide secondary poisoning, which means she ate a rat that had consumed the toxic chemicals. The bobcat wasn’t directly targeted. Instead, the otherwise healthy female consumed enough poisoned rats to accumulate a lethal dosage of the rodenticides used to control rat populations on the island. As a result, she hemorrhaged to death over what must have been an excruciating week-long period. The revelation was heartbreaking.

Anticoagulant rodenticides, especially the more potent second-generation compounds, travel up the food chain when predators eat animals that have consumed rat poison. As the compounds are transferred from animal to animal, they become more potently concentrated through a process called biomagnification. With enough exposures to poisoned rodents, predators can accumulate lethal levels of the toxins. In a painfully ironic twist, the animals that naturally manage rodent populations are decimated along with the pests rodenticides target. Which populations do you think will rebound faster, the rodents that reproduce every several weeks, or their predators who reproduce once a year? In the end, using toxic rodenticides creates a vicious cycle wherein we lose our wild allies in the fight against rodents and become more dependent on toxins. 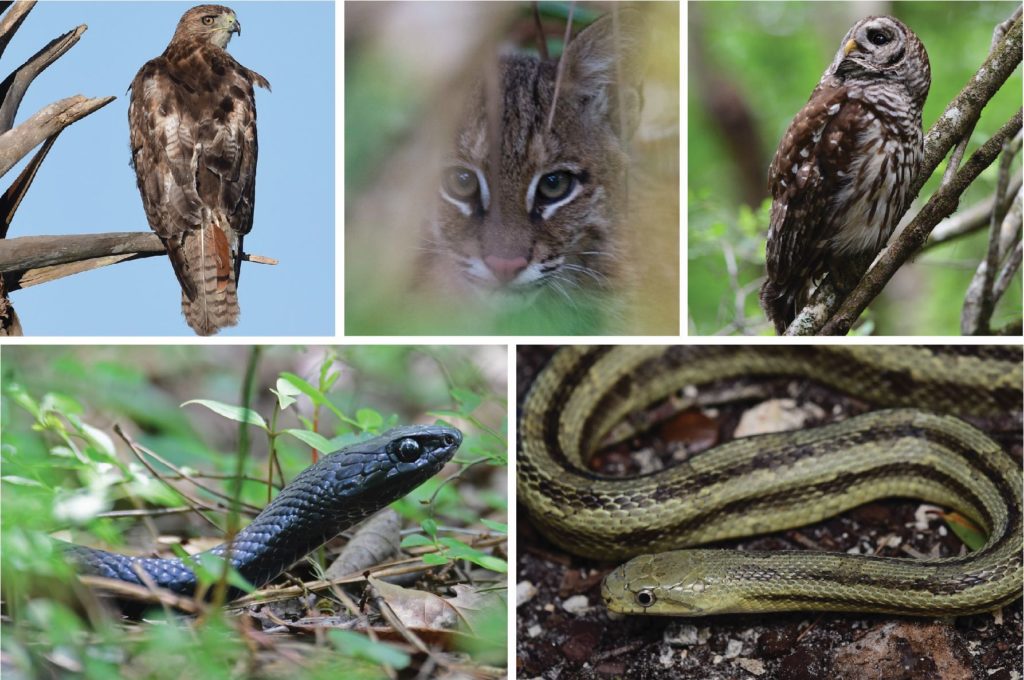 Each of these predators acts as a natural ally in the fight against rodents. Unfortunately, each is harmed by our dependence on rodenticides. From top to bottom, left to right: Red-tailed hawk, bobcat, barred owl, black racer, yellow rat snake.

It’s not just predators that we should be concerned about. The compounds can also cycle through food webs when scavenging animals—from crustaceans and insects to mammals and birds—either directly consume rodenticides or consume poisoned corpses. While not all rodenticides are toxic enough to create these ripple effects in food webs, second-generation anticoagulants are. Unfortunately, they are also the most commonly used chemicals to control rat populations. 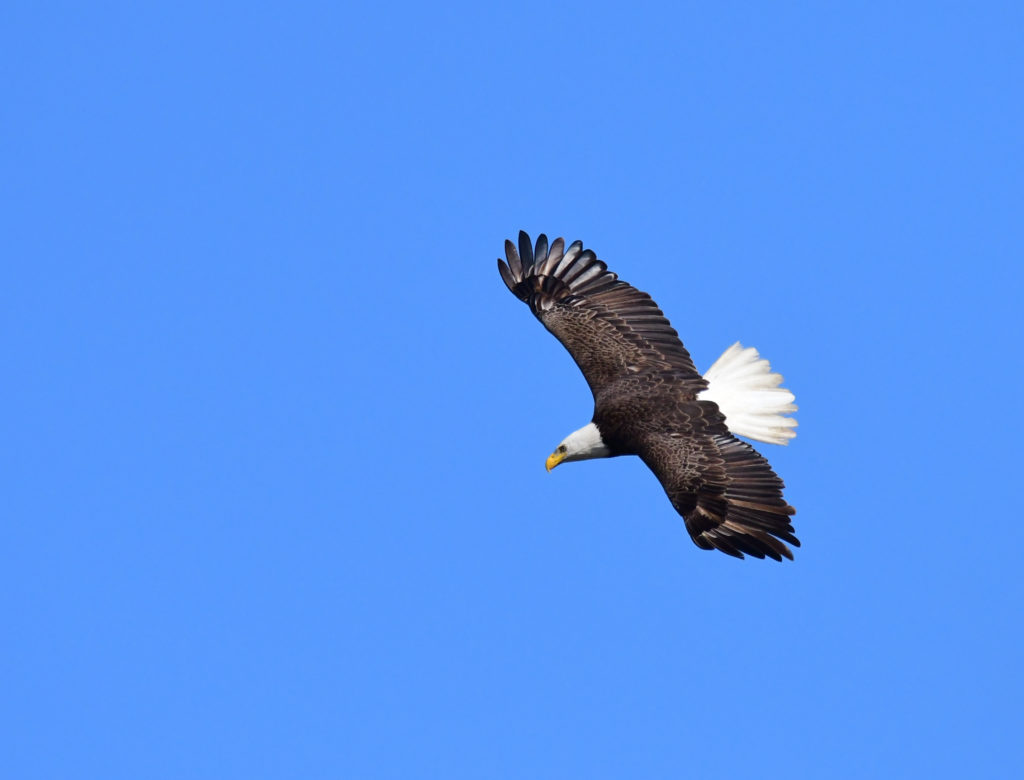 Scavengers, like bald eagles, are not immune to rodenticide exposure as a result of secondary poisoning.

Regrettably, hardly anyone has been paying attention in South Carolina to determine the scope of the issue. While people who rehabilitate sick or injured animals across the state report seeing symptoms indicating rodenticide intoxication in some of their patients, little to no data collection has been done. This isn’t for lack of interest. Testing for these compounds is expensive and requires invasive sampling that’s better done after an animal has died. To make matters worse, animals affected by anticoagulants often succumb to more obvious causes of death before the toxin reaches its lethal climax. Animals affected will become weakened by the toxin, exhibiting signs of lethargy and confusion. As a result, they are easy prey for local predators or hunters and are more likely to be struck by vehicles. When this happens, we typically assume the cause of death was the more obvious trauma-inducing incident and do not investigate for additional possible factors.

But, in the case of the bobcat, local biologists felt concerned anticoagulants were the cause of death especially given she appeared otherwise unharmed. To find out what caused her death, a necropsy was ordered, and signs of hemorrhaging were found. Tissue samples were then collected and sent to a California laboratory for analysis to determine what caused the hemorrhaging. Such an extensive process is cost-prohibitive and rarely pursued by the non-profit organizations that most often interact with poisoned wildlife. As a result, rehabbers can only treat external symptoms as they encounter them and are rarely able to confirm why a patient is exhibiting symptoms or has died. All of these factors contribute to the lack of data on the scope of rodenticide poisoning in South Carolina ecosystems. All we really know for sure is that at least one bobcat has been impacted, but it’s highly likely many more have been harmed. 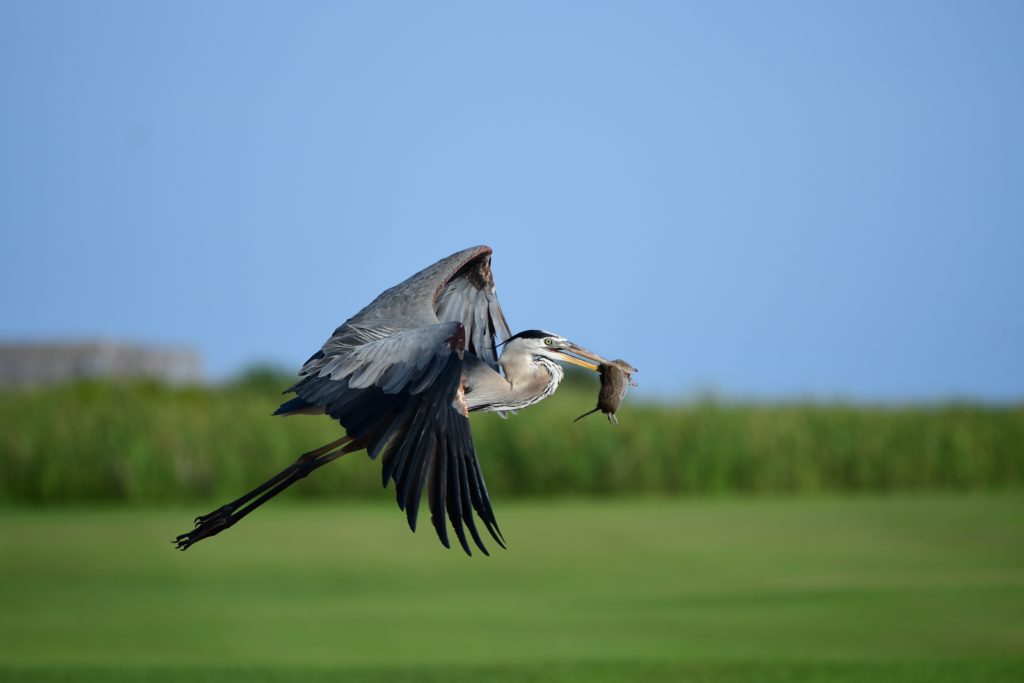 This photo of a great blue heron carrying a rodent meal caught on a golf course on Kiawah Island perfectly illustrates a potential route of secondary poisoning. It also shows how poisoned rats can enter into habitats like salt marshes, spreading the impacts of rodenticides.

For the community on Kiawah Island, one bobcat is enough to warrant change. They’re working to reduce the use of second-generation anticoagulant rodenticides. Steps are voluntarily being taken by the island’s largest pest-management providers to eliminate these chemicals from their pest management plans. This is great news for the bobcats, and for any other rodent-consuming predator or scavenger that calls Kiawah home. It’s also great news for the residents. Rodenticides can make their way into human food sources, typically via seafood. Research has proven that shrimp, crabs, and fish populations can consume and transfer rodenticides along food webs, likely as a result of direct consumption or scavenging poisoned corpses.

So, how can you help mitigate an issue that is most assuredly impacting many members of our natural ecosystems? First, if you have your own pest management plans, eliminate the use of second-generation anticoagulants. Talk with your pest management companies and ask them not to use second-generation anticoagulants on your property. Anything containing brodifacoum, bromadiolone, difethialone, and difenacoum presents a high risk of impacting non-target animals via secondary poisoning. While ideally, we’d reduce the use of any toxins, anticoagulant or otherwise, at least removing those four will provide relief for non-target wildlife. If you’re willing to go all the way and eliminate poisons altogether, the Hungry Owl Project, R.A.T.S. group, Safe Rodent Control Resource Center, and Barn Owl Trust each have wonderful resources that can aid you in achieving your goal.

Once you’ve tackled the issue at home, talk with your neighbors. Alert them to the problem. It’ll take a literal village to mitigate the impacts of toxic second-generation anticoagulants. If your community has an HOA, consider approaching them on the topic, or bring the issue to your local town, city, or county council. At the very least, consider making the change on your own and educating others about it. We must learn to live alongside wildlife and adapt to our wild neighbors instead of forcing our own management methods, which can be lethal. As you’re making your own resolutions for 2020, we hope you’ll consider making changes to the pesticide management plans at home and in your community.

(All photographs taken by Jacob Zadik of Kiawah Island)