Keeping offshore drilling off our coast 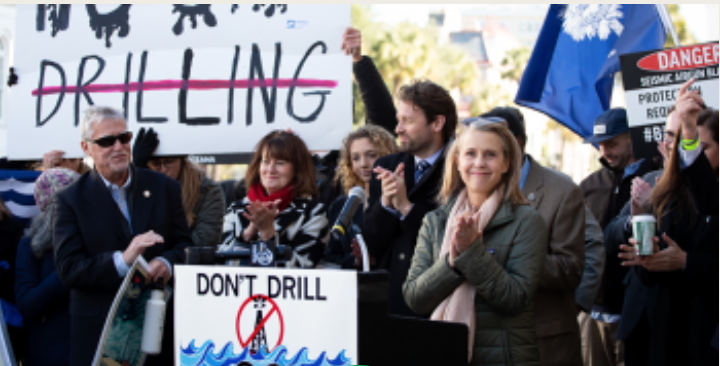 This week marks the 10th anniversary of the Deepwater Horizon oil spill in the Gulf of Mexico, a grim reminder of why the majority of South Carolinians are opposed to offshore drilling off our coast.

More than 200 million gallons of oil, enough to fill more than 300 Olympic-sized swimming pools, gushed out damaging 1,000 miles of Gulf shoreline from Texas to Florida. That would cover the coast of South Carolina more than five times. As many as 82,000 birds, 6,000 sea turtles, and 25,000 marine mammals were harmed.

The spill also caused the loss of 25,000 jobs and led to $700 million in lost wages. The South Carolina coastal plain and its economy would buckle under that kind of damage. That’s why the Coastal Conservation League is working with its conservation partners and the citizens of our state to fight this dangerous practice at the state and national levels.

Let’s start with the state. South Carolina’s elected leaders knew last year that most residents opposed offshore drilling at a time the federal government was pushing to open the waters off our coast to seismic testing, the precursor to drilling. If they were going to stop or at least hold off drilling, they had to get creative, and they did. State Senator Chip Campsen (R-Isle of Palms) came up with a novel idea. He included an amendment, known as a proviso, in the state budget that blocked the onshore infrastructure associated with offshore drilling. “I’ve spent time in the Gulf of Mexico. I know first-hand that offshore drilling would require massive industrialization of our coastline. … There is no place where the onshore infrastructure needed to support offshore drilling is appropriate,” Campsen said at the time.

Following the April 17, 2019 press conference before a vote approving the one-year amendment—which had the support of Governor Henry McMaster, Attorney General Alan Wilson, and a bipartisan group of state legislators—McMaster sent out a message on Twitter. “There are many reasons, from our pristine marshes to our fishing industry to tourism, that South Carolina does not need and does not want seismic testing or drilling along our coastline,” he said.

The Conservation League and our partners have been working for the people of South Carolina for years to push back on offshore drilling by meeting with legislators, holding rallies, and gathering support for Campsen’s proviso. This year we pushed to make the infrastructure ban permanent—a bill that enjoyed majority support. But, as with so many things, that progress is on hold due to Covid-19. The General Assembly is focused on the pandemic response and the state’s budget.

We’re taking this time to step back and appreciate the progress that South Carolina has made to stop offshore drilling, and to consider our next steps.

Five years ago, it seemed entirely possible that drilling for oil and gas off the South Carolina coast would be happening today. But an army of volunteers—with support from the Conservation League and other organizations—jumped into action, attending city and town council meetings along the coast to get resolutions approved that opposed offshore drilling. They met with elected leaders, made calls, and sent emails. That movement made a difference, and while the threat is not gone, we now have some solid team of opponents in place.

More defenses are needed, however, and we’re working on those as well. We supported the Coastal and Marine Economies Protection Act last September. This piece of proposed federal legislation, sponsored by Congressman Joe Cunningham (D-S.C.), passed in the U.S. House and now stands in the U.S. Senate. Cunningham joined the Conservation League and our conservation partners on a webinar on offshore drilling late last month. You can watch the full discussion here.

While stopping offshore drilling and other forms of “dirty energy” is important to us, we are also focused on advancing clean energy solutions, like solar and wind.